Our Garden Renovation | Part One

I’m so excited to finally be able to share this with you all 🙂  Last year J and I took the plunge and invested a hell lot of our money into having our garden completely landscaped.

As you’ll see from the photos, it used to look more like an urban jungle/wilderness than a garden.  A lot of people asked why we didn’t do it ourselves; until they saw pictures of what we’d have to contend with!

Our garden is a weird triangular shape with a front garden, back garden and side garden.  As the project was so big, I thought I’d split it into three posts.  This post is concentrating on the front garden.

The driveway was inaccessible, not in the least because there were bags of ballast and sand and a pallet of bricks stuck at the bottom.  J and I spent a long weekend with a couple of shovels and a wheelbarrow moving everything up to the garage!  However, after the bags were all moved, we could only park our car a little way up the drive as there was a massive tree root and lots of rubble in the way!

There were concrete and brick steps leading up to the house which looked like they’d seen better days; they were especially slippery in wet and icy weather and there was nothing to hold onto if you fell :/ 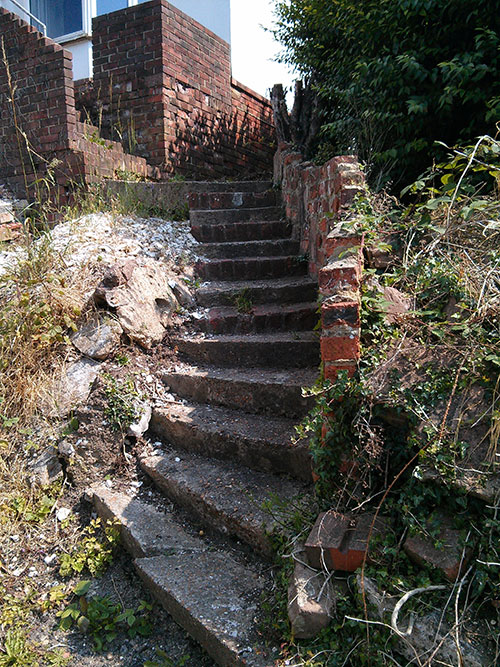 There was a lot of rubble in the garden which had been left from J and his dad working on the inside of the house; it had become a bit of a dumping ground.  I do like the wild flowers though! 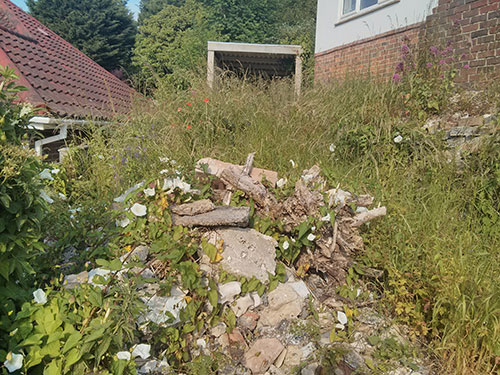 J and I both agreed that we wanted better steps, both from the front and back of the house, a decking area and an accessible driveway.  I wanted a couple of flowerbeds so the front would look pretty from the road 🙂

All the hedges and rubble were removed.  The driveway was levelled as much as could be done and the steps and brick verandah were demolished.  In place of the hedges at the side, we opted to have fencing put in; something we’d later come to regret as our neighbour’s garden sits so much lower than ours, so his side of the fence looks an absolute mess. 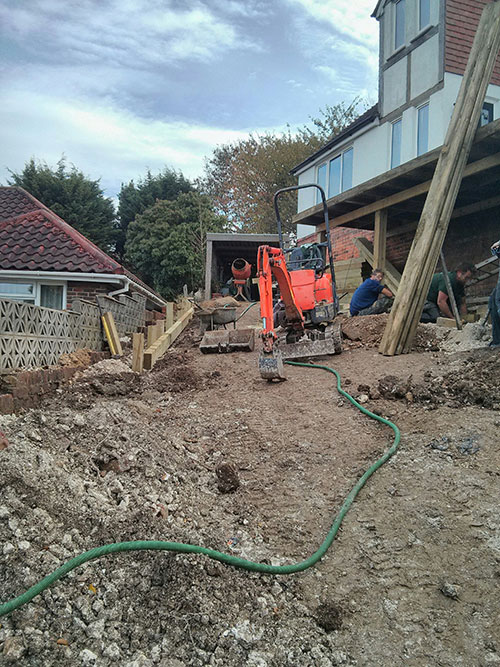 The work then started on the decked verandah and laying the bricks for the driveway.  It was really exciting seeing it come together, although at one point, the landscaper said there wasn’t enough budget for two set of steps leading up to the decking.  Luckily it was all detailed in the quote so we got our two sets of steps!!

The three choices for the driveway were gravel (out of the question on a slope), concrete (relatively cheap but looks quite ugly) or block paving for the driveway.  As you can see, we went with the blocks as we thought it looked better and it’s a lot easier to maintain – if you break a brick, you can just dig it up and replace it!  We chose pewter mix for the main pattern and charcoal for the borders.

As well as a big flower bed by the main steps, we also have a small bed running up the left side towards the garage.  This is going to look really pretty in summer when all the flowers are out 🙂 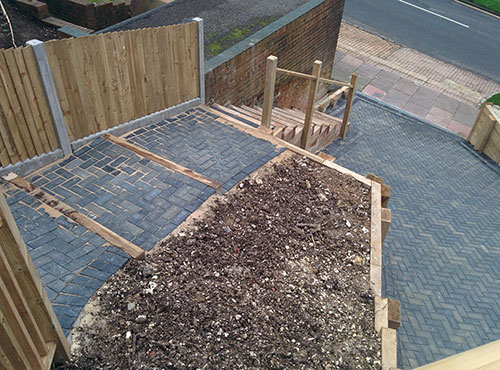 I think we had most problems with the front garden.  The electricity and gas pipes were right in the way and it cost too much to move them, besides which we didn’t have time!  That means the driveway is still a lot steeper than we really want it to be and some of our friends find it quite hard to drive up.  The steps at the bottom were made of different sleepers than we’d used for the rest of the project, so it makes them looked like they’ve just been tacked on at the end as an afterthought; which to be honest, they pretty much had been 🙁  The flowerbed is still full of bits of rubble so we’re going to have to dig it up ourselves and put top soil down before we can plant anything in there.

That being said, I love being able to park the car on the drive or in the garage; it makes it easier when we bring the shopping home.  I also love the new decking area, we sat and watched the fireworks from it last year which was amazing!  We have an absolutely stunning view; this is when it snowed recently!

Click the links to read parts two and three 🙂

What do you think so far?  If it was your garden, what would you have done to it?  Let me know in the comments below 🙂 x

A Very Festive Hamper From Jet2holidays*