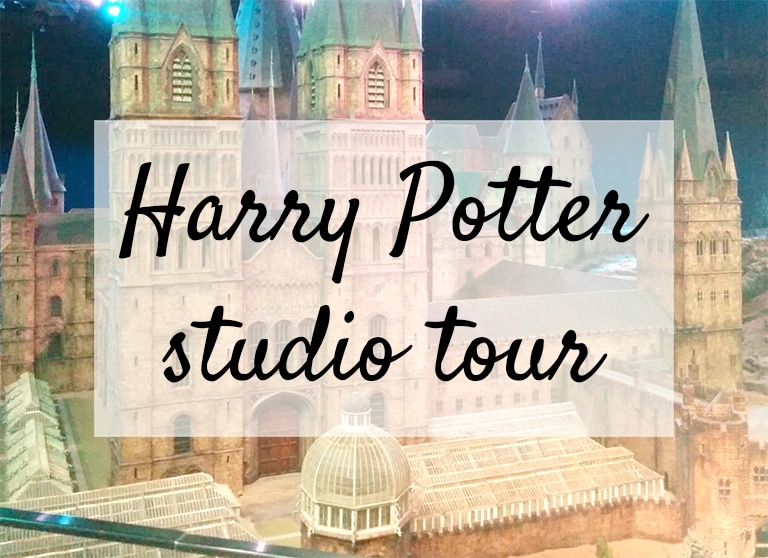 Every month my friend, Rachael, and I make time to hang out with each other and try and do something different and fun. Among other things, we’ve been to the Foodie’s Festival, the True Crime Museum, bowling and to a spa.

But this month was one of the most exciting months so far because we only bloody went to the Harry Potter Studio Tour in London!! #HazzaP

It’s somewhere we’ve both been before, but never together and not since they have all the new parts like The Forbidden Forest, so we were really excited to set off on our road trip, complete with road snacks!! 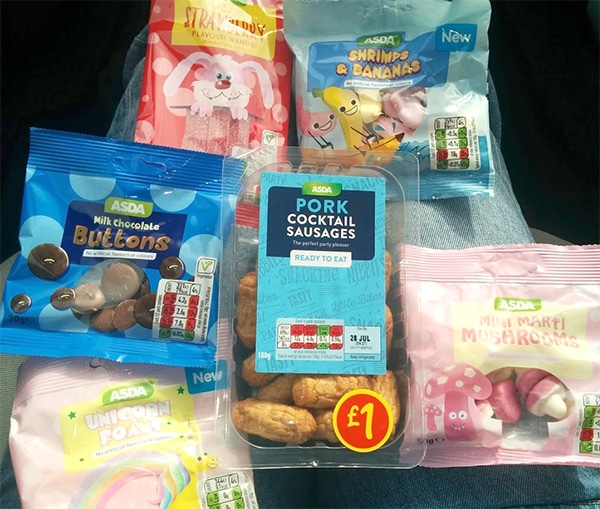 We left in plenty of time (mostly because we were going on the M25), but due to the complete lack of traffic, ended up being about an hour early. We asked a helpful member of staff if we could go in early and she said we could try. We were booked on the 1pm tour but ended up going in at 12pm!

For the most part, it was just how I remembered it and I got to hang out by the Slytherin table in the Great Hall!! #Slytherinforlife 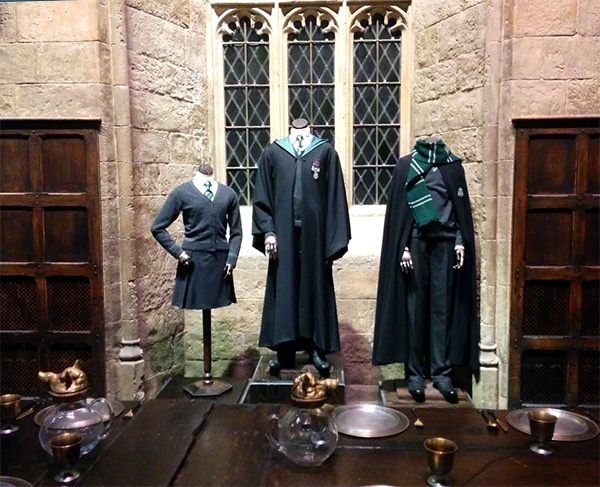 There were a few new additions though, like being able to summon a broomstick to your hand (soz about the potato quality, it’s a still from an Insta story video) … 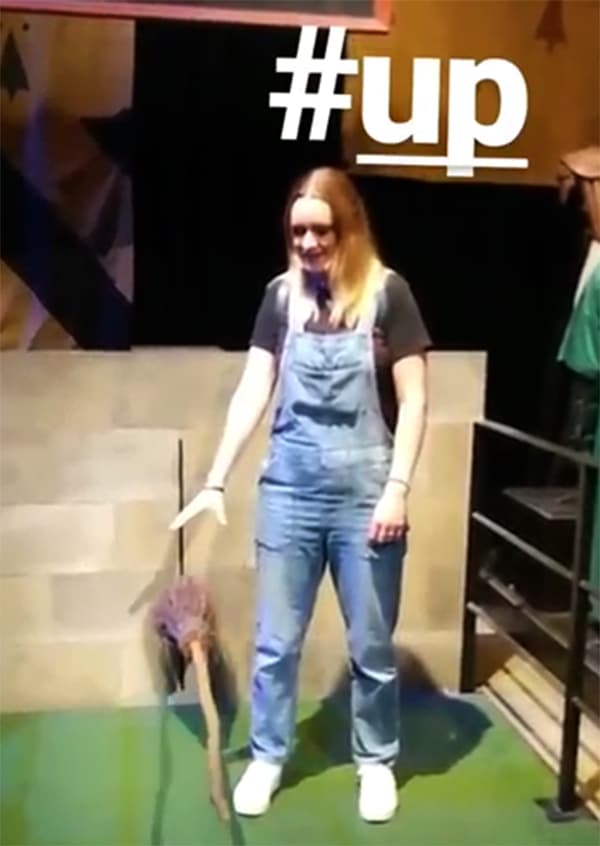 … and the amount of broomsticks you could have a photo on (in front of a green screen so it looks like you’re flying!). When I went there was only one, but now they have several so there aren’t massive queues! It’s still bloody expensive though; £14 for a photo! 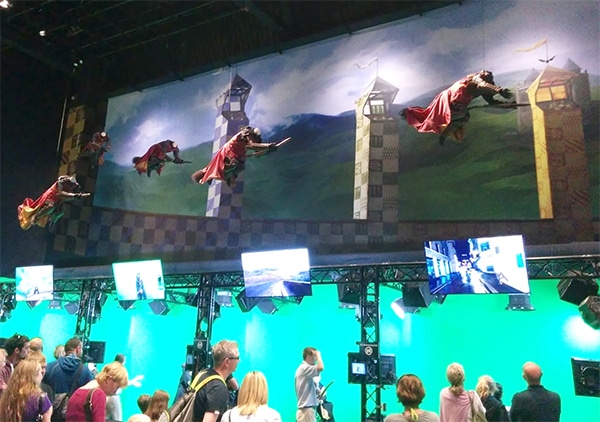 Once you’ve wandered around the main sets; like the Gryffindor common room, the potion’s classroom and Malfoy Manor, and seen all the incredible props, you get on to the new exhibits. 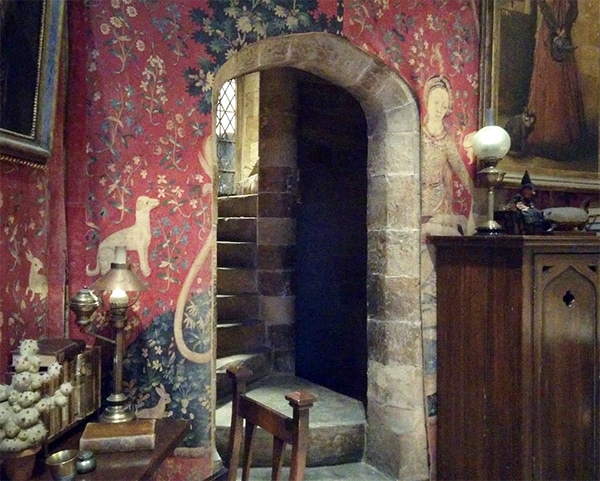 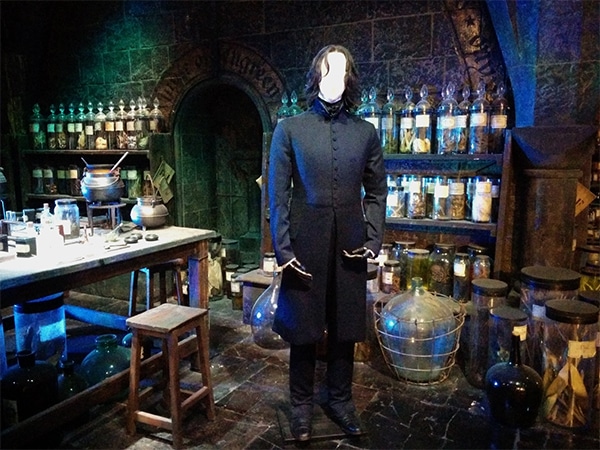 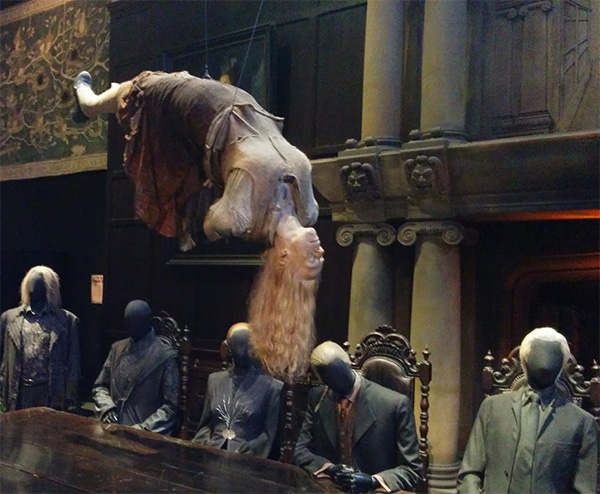 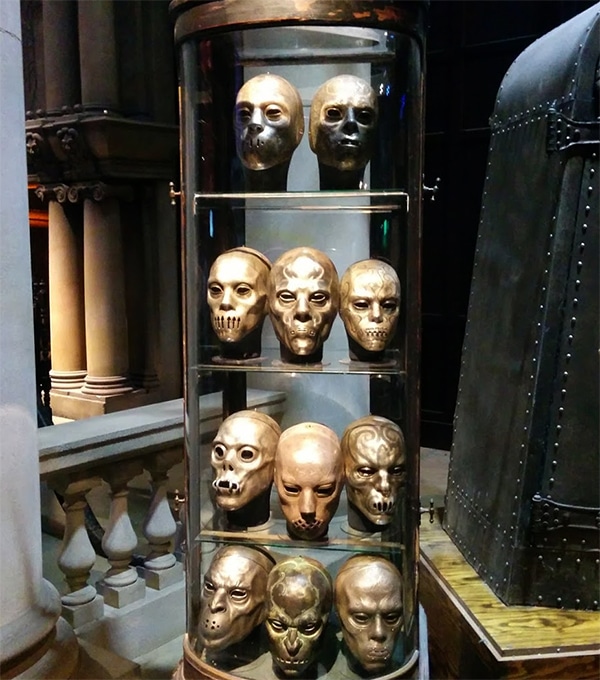 First up is the Forbidden Forest. It looks really creepy and dark but Hagrid is there to light the way 🙂 There’s even thunder and lightning going off at random intervals 😀 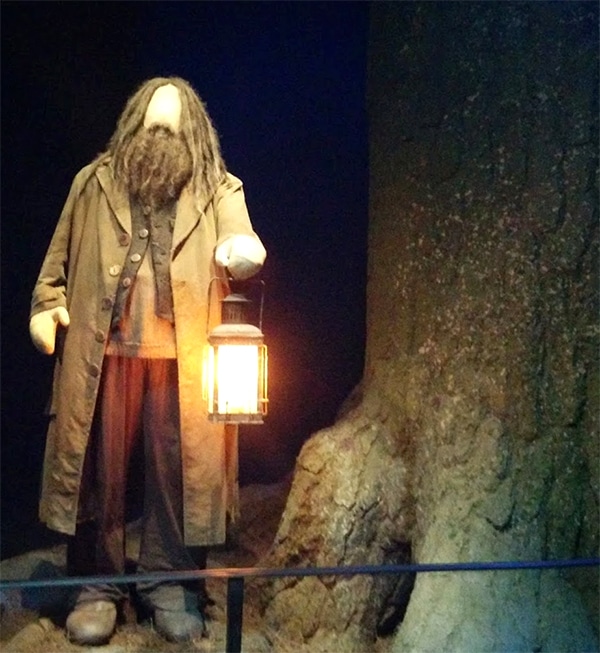 *no spoiler photos here!* There’s an animatronic Buckbeak you can bow to and, of course, Aragog, but there’s a way round that you can avoid all the spiders if they’re not your thing. It’s really atmospheric in the Forest and it looks incredible! There’s also a new gift shop specifically for the Forbidden Forest 🙂

Next up is Platform 9 ¾ and the Hogwart’s Express. Again, there are several trollies lined up so plenty of people can have their photo taken while “pushing” the trolley through the wall 🙂 Very cool idea! 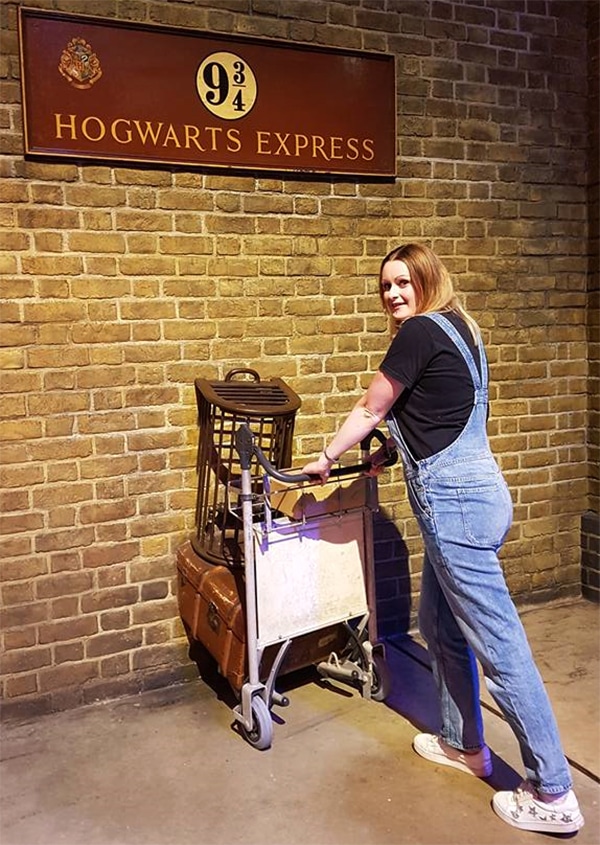 You can wander down the carriages of the Hogwart’s Express or sit in on of the carriages while you “act” in front of the cameras. Again, you can buy these snaps for £14 from the gift shop there! 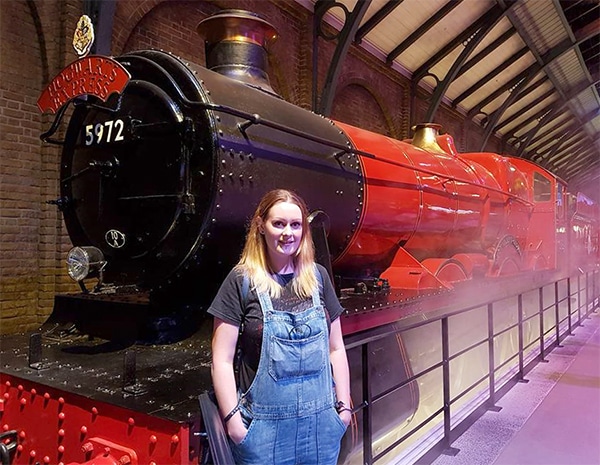 Next up was lunch. We bought sandwiches for about £5/6 which wasn’t too bad. We’d also pre-ordered our butterbeer complete with souvenir tankard (plastic though) and butterbeer ice cream with souvenir sundae dish (also plastic) a few days before we went. I’d forgotten how much I really didn’t like the butterbeer (it’s fizzy) but the ice cream was delicious 😀 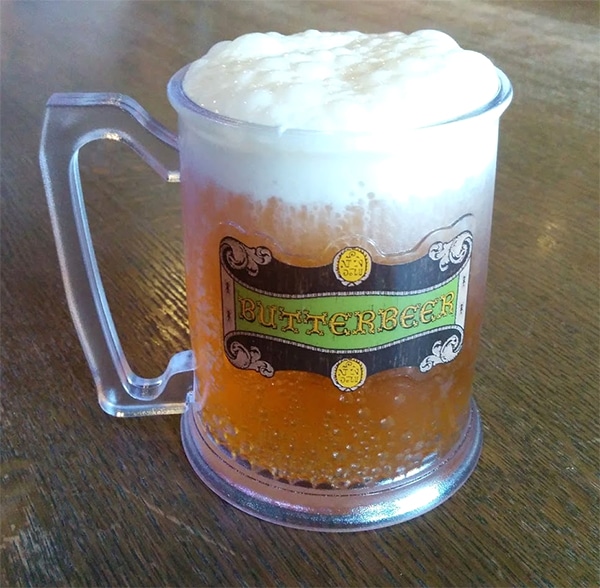 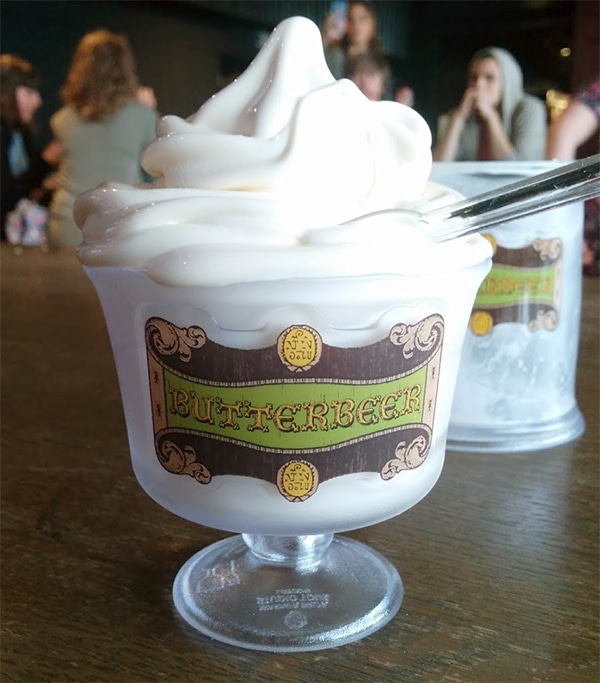 I’m not really sure why they offer the option to pre-buy though as it costs exactly the same and you still have to queue up! Although if you’re buying food, you can show your ticket at the till and just collect your items from the butterbeer stall without having to queue up again. (There are separate food and butterbeer queues!)

Once we’d had lunch we ventured outside to the Knight Bus, Privet Drive and the Hogwart’s Bridge. You can now walk through Privet Drive, complete with envelopes all over the front room and Harry’s locked cupboard! Very sensibly, all the wallpaper is protected by plastic panels to stop them getting dirtied or vandalised! 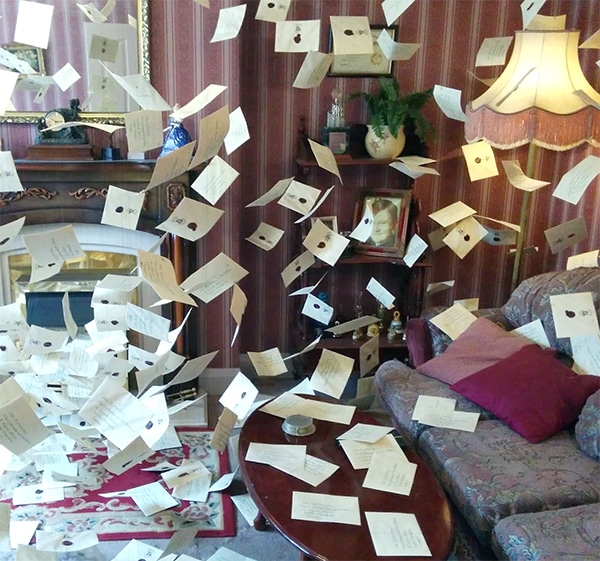 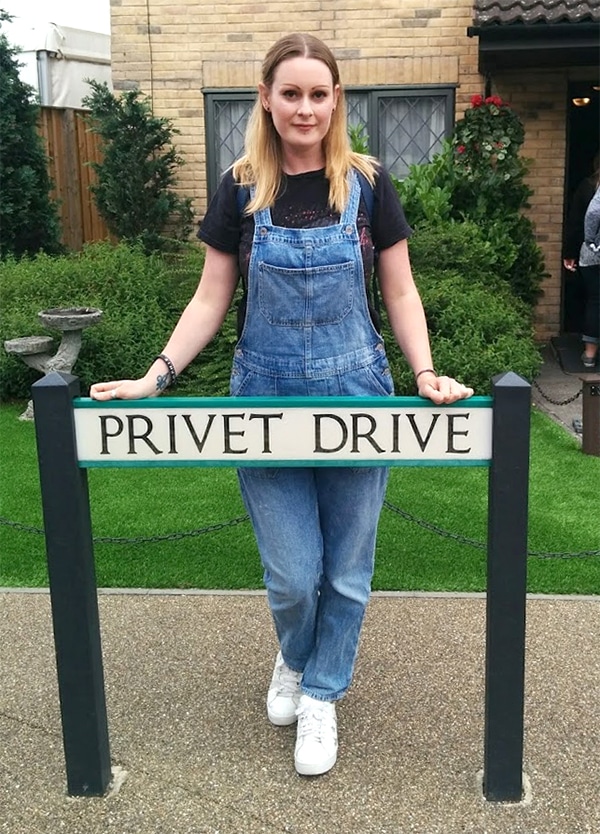 We kinda wandered quite quickly through the next bits as I think we’d both had enough of walking by then. I also had to stop at the gift shop. (Oops!) I got an awesome Dark Mark t-shirt, some Every Flavour Beans and two sour apple Honeydukes lollies (one for me and one for J, but he ate his already!!) 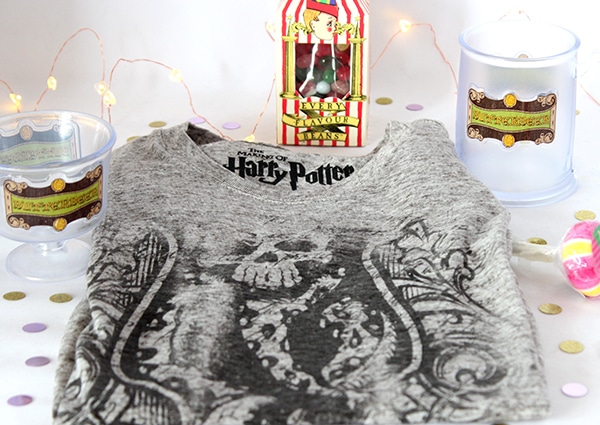 Unfortunately there were no changing room facilities in the gift shop, so when I tried the top on at home it was too small. Luckily I emailed the Studio Tour and they said I could post it back for an exchange!!

Apart from that disappointment, it was a brilliant day but unless they add more, like being able to go into the shops in Diagon Alley, I’m not sure I’d want go back. Unless my mum really wants to go, I’d go back for her! (Your hear that Mum?? I’d go back for you!!) 😀 The general tickets are quite pricey at £39 but I personally think it’s definitely worth it if you’re a Harry Potter fan!

Have you been to the Harry Potter Studio before? Is it something on your bucket list? Let me know in the comments below 🙂 x