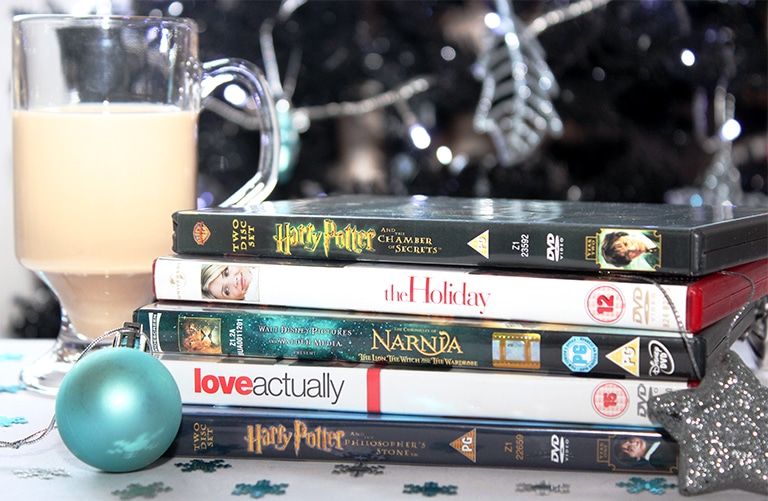 Anyone else still sleepy and full from yesterday’s Christmas dinner? I don’t feel like I can move anywhere for a while so it’s definitely time to snuggle up under a blanket, popp on a Christmas film, drink eggnog and scoff all the best Quality Streets (strawberry creams if anyone’s wondering).

Here are my favourite Christmas films that I like to watch over the holiday season (and I know that some of them are slightly debatable as to whether they’re specifically “Christmas” films, but it’s my list so don’t be a bah humbug!)

Harry Potter (Philosopher’s Stone and Chamber of Secrets) – Not exactly “Christmas” films, but there’s something completely festive about snuggling down to watch these. I think it’s the Christmases spent at Hogwarts and how magical it looks. I’d love to be there and join in on the feasts! I’ve only put the first two films on the list because they’re slightly more feel good than the remaining films!

Love Actually – How on earth can you have a list of favourite Christmas films without sticking this one on the list? It’s such a British classic feel-good film! There are 9 different love stories shown within the film, but somehow all the stories and the character’s lives connect in some way. It’s funny, it’s heart-warming, heart-breaking and sweet all at the same time. Plus it has ALL the famous people in it! If you’ve never seen it before, I’d definitely recommend watching it! I think my favourite storyline is Hugh Grant as the Prime Minister and Martine McCutcheon as his PA.

The Muppet Christmas Carol – I remember my brother bought this for me one Christmas on VHS (lols, I’m so old) and I absolutely loved it! A modern (well for 1992) spin on a literary classic, it’s got everything you’d need; singing, jokes, Michael Caine and Kermit the frog! It’s such a lovely family film 🙂

The Lion, The Witch and The Wardrobe – This is such a beautiful film (and based on the book of the same name. Obvs). Set during the Second World War, four children are evacuated to a house in the country and find a secret world within a wardrobe. Narnia is under a spell from the evil White Witch who has made it permanently winter but never Christmas. And the children are the only ones who can save everyone. It’s such a visually stunning film and the cast are incredible! Oh hai there James McAvoy!

The Holiday – Absolutely love this film, it’s definitely your typical rom-com, but sometimes that’s what you need. Two broken-hearted women (Kate Winslet and Cameron Diaz) swap homes (one in England and one in LA) for the holiday season (bit like Air B&B for 2006) to get away from their lives and inevitably meet the local men.

Die Hard – This one has the world debating, but it most definitely IS a Christmas film; it’s set on Christmas Eve! At a Christmas party! And okay, there are a lot more guns, violence and terrorists than your average Christmas film, but it’s broadcast every year round Christmas. And it has the late Alan Rickman in it as the super villian. Bonus!

What’s on your favourite Christmas film list? Let me know in the comments below 🙂 x