Five Of My Favourite Films 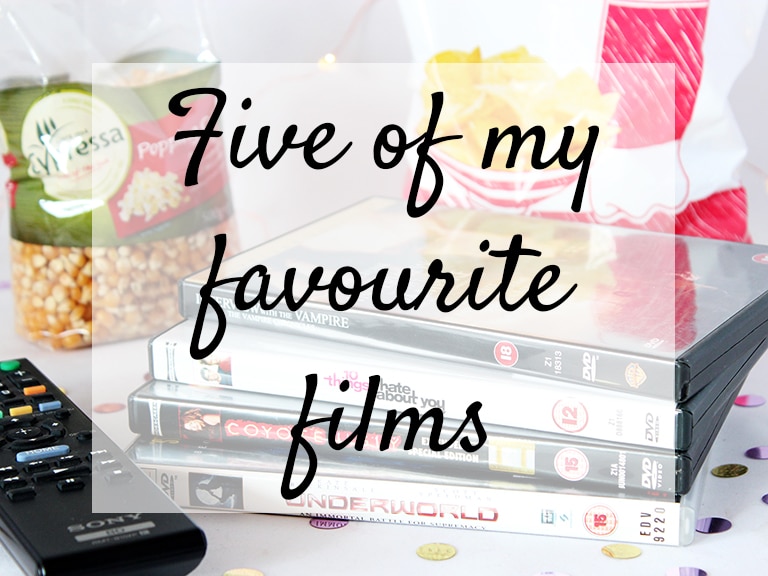 This post was really hard to write as I have so many favourites, and I’ve probably forgotten loads, but I’ve managed to narrow it down to my top five. I think. For now.

The following is going to be an eclectic rollercoaster because my favourites are spread across the genres, so fasten your seatbelts and prepare for the weirdness that’s about to follow 😀

The Crow – This had to be in my top favourites because it’s so goddamn beautiful and also I’m just a massive goth at heart. Based on the graphic novel of the same name, the film follows Eric Draven, who is brought back from the dead to avenge his and his fiancée’s deaths. Expect lots of violence and bad language. The soundtrack is just stunning, mixing a classical score from Graeme Ravell, with rock and metal from the likes of The Cure, Rage Against The Machine and Nine Inch Nails. There also some incredible speechs about life and death, narrated by Sarah, the young girl who was often looked after by Eric and his fiancée, Shelley, as her mother is too off her face on smack to care.

10 Things I Hate About You – I love this film so much it’s unreal. It’s a modern-day twist on The Taming Of The Shrew by William Shakespeare. The film stars Julia Stiles as Kat, an out-spoken feminist teen, who seemingly hates boys and fun. Her sister, Bianca (played by Larisa Oleynik from The Secret World of Alex Mack) desperately wants to date the school stud Joey (Andrew Keegan), but her father refuses; unless Kat dates too. Cameron (Joesph Gordon-Levitt), the new boy at the school desperately wants to date Bianca so attempts to set up her sister with bad boy Patrick (Heath Ledger) by paying him to take her out on dates!

Interview with the Vampire – This film is also based on a book which was written as part of the Vampire Chronicles by Anne Rice. Despite a lot of nagtive press, Tom Cruise stars as the spell-binding Lestat, with Brad Pitt as the newly made vampire, Louis. The film follows their stories throughout the centuries and how turning a child (played by Kirsten Dunst) into a vampire changes everything. I love this film so much that when I went to New Orleans and San Fransisco, I actually went to some of the places where the film was set! (P.S Queen of the Damned was never, ever made and we do not talk about it!)

Coyote Ugly – Who doesn’t love a feel-good film about a girl trying to make it in the big city with her music? Add a dash of chronic stagefright, a bar where anything goes and a dose of sexy in the form of Adam Garcia and you’ve got yourselves a winner. Violet Sanford is a song writer who wants people to sing her songs, but moving to the big city, she soon finds out the only way for anyone to hear her songs is for her to sing them. And she can’t because she’s too scared. Whilst trying to get by, she takes a job at Coyote Ugly, a bar where they dance on the tables and hose down anyone who orders a tap water.

Underworld – Another vampire film for the list but this time the main character is the beautifully leather-clad Selene (played by Kate Beckinsale). The vampires have been at war with the lycans (werewolves) led by Lucian (Michael Sheen) for centuries, but when Selene discovers they’re stalking a human because his blood holds the key to unlocking a vampire/lycan hybrid, which is something the vampires Elders are dead against, she uncovers some dreadful truths about her maker and the secrets he’s been keeping.

Which films would make your top list? Let me know in the comments below 🙂 x