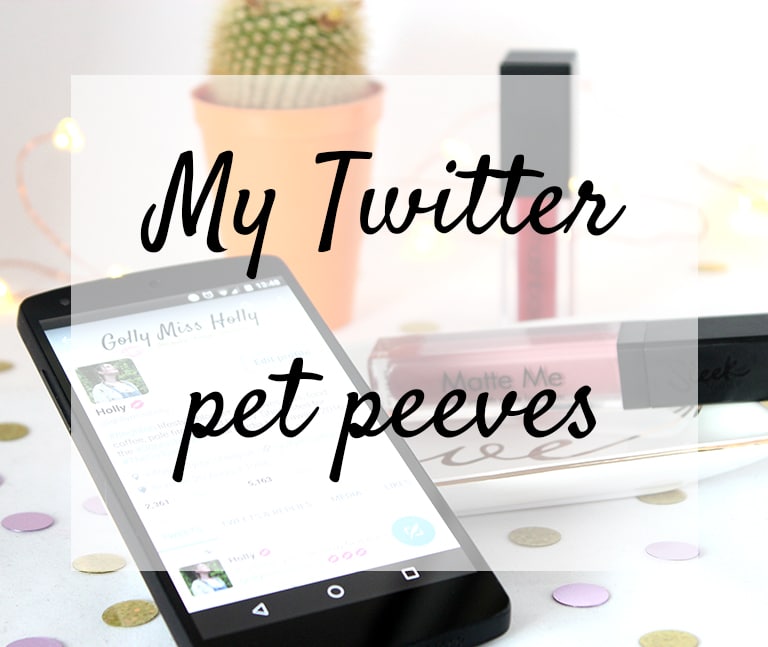 Last year I wrote a pretty popular post about why I’m unlikely to follow you on Twitter. I honestly didn’t think it would turn into my most read post; but there we go! If you wanna have a nosey, you can read it here.

So this is kind of a continuation, except now that I’ve been avidly using Twitter for the last year and a half, here are some of my Twitter pet peeves.

The automated DMers – There are sooooo many tweets about how people hate auto DMs, (these are direct messages that get sent out automatically whenever someone new follows you, for any of you who were unsure) I’m surprised there’s anyone left who still has them set up! I think my favourite one I ever received was from a blogger who said thanks for following her on Twitter and I could I please follow her across ALL her social media accounts, and once I’d proved I’d done this using screenshots, she’d follow me back!! And yes, I’m being totally serious and I’m pretty sure she was too! And as it happened, I immediately unfollowed her on Twitter instead. (I really hope she doesn’t still do this!!)

The drama llamas – Don’t get me wrong, I’m all for people standing up for what they believe in, but every time there’s blogger drama on Twitter, the same names always seem to keep cropping up. If I’m being honest, as much as I like a bit of blogger drama, I actually prefer my Twitter feed to be a sociable, happy place and while I don’t mind the odd ranty tweet every now and then, I just don’t need to see it all day every day. Especially when sometimes it seems like people are disagreeing with someone else purely for the sake of having an argument.

The people who can’t hashtag properly – This is one of my biggest Twitter pet peeves. There are two quite popular hashtags for companies looking for bloggers to collab on projects with. These are #bloggerswanted and #bloggersrequired. Which is great until you’re looking through and it’s just full of bloggers using them to promote their own posts. This is not what the hashtags are for!! Why not use more appropriate hashtags instead like #bbloggers #lbloggers #fbloggers etc.

The list adders – Apparently I have one list and that’s for some of the lovely ladies who I went to the Girl Gang Event with back in August last year. That being said I don’t ever actually use it because I always forget that there’s a list option. Well I forget until someone adds me to one of their lists. Being added to lists started out as being really sweet, except now I get added by the same people to a different list. Every. Single. Day. And always with ridiculously similar list titles like “beauty blogger” “beauty bloggers” “bbloggers”. I don’t understand why? At one point some guy was adding me several times a day and it turned out we didn’t even follow each other! I ended up blocking him because it just became too irritating!

The begs – I’ve seen two types of Twitter begs. The first seem to tweet constantly about wanting a hotel room because they’re going to Spain in 3 days and haven’t got anywhere to stay yet, whiter teeth, a new car or a train ticket so they can see their favourite band play in London, all while using the #prrequest hashtag. OMG, just bloody pay for it like everyone else does (except the bloggers that the companies actually want to work with!) The second type of begs are well meaning, they’re raising money for something, which is applaudable; except they retweet every 20 minutes or so and your feed gets spammed with requests for money to buy Billy a new bed because he broke his trying to wrestle with the dog.

The naughty PR companies – You know the ones. They tweet that they’re looking to work with bloggers on an exciting project, so you email them and you promptly get a response that they’re looking for do follow links with a budget of £25! No, no and no!! This is so uncool and I bloody wish they’d stop asking. Especially for such insulting fees!! If you’re relatively new to blogging and not sure why this one annoys me, check out my guide which explains what do follow and no-follow links are and why bloggers need to use them!

Are any of these your pet peeves as well? If not, what are your Twitter pet peeves? Let me know in the comments below 🙂 x