Things Not To Say About Chronic Illnesses 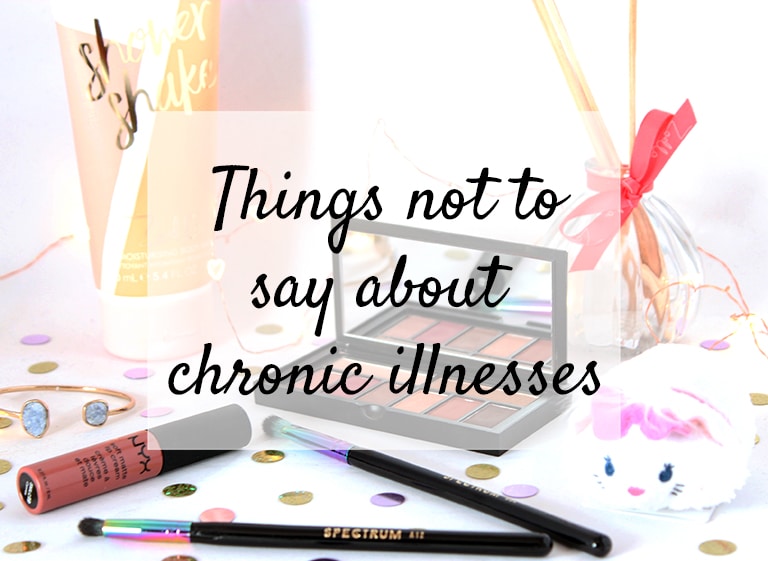 For the past 20 years or so, J has felt constantly tired, struggles to concentrate for long periods of time, and generally, his whole body aches with minimal exertion. This has got a lot worse over the past few years and, because he was often in bed at the weekends, I actually started this blog to have a hobby while he was sleeping!

He finally got diagnosed with Fibromyalgia a few years ago, and although some people are well-meaning when they find out about it, some of the things people have said are just thoughtless.

Here are ten things of the most common things people have said to me about J’s illness and things you definitely shouldn’t say to people with chronic illnesses or their families:

1. My friend/sister/cousin’s friend had that but they recovered after a couple of years – Well fucking whoop for them. As lovely as it is to hear someone you know has completely recovered, some people don’t ever recover or feel better. Don’t rub recovery in people’s faces, you’re not being helpful.

2. He still works so he can’t be *that* ill – If you’re familiar with chronic illness, you might have heard of the spoon theory, if not, let me explain. People with chronic illnesses get 15 metaphorical spoons a day and every single thing you do costs spoons. So, getting up and dressed could use up 3 spoons, eating breakfast uses 1 spoon and going to work uses 8 spoons (all the websites vary but you get the idea). Once you’ve used up your 15 spoons, you have no more spoons until the next day. Some people might use all their spoons getting up and going to work and just don’t have any spoons left when they get home. Some people can work when they have a chronic illness, some people can’t.

3. I’ve heard doctors think Fibromyalgia isn’t real, so isn’t he just being lazy? – Yes, that’s exactly what it is. He just doesn’t want to be able to follow a recipe or work on our house or be able to stay up for a whole day without having to go to bed because he feels so awful.

4. Surely it must be so hard on you having to do everything, how are you happy? – OMFG. What on earth would make you think this is okay to say out loud? Seriously, if this phrase wants to fall out of your mouth, kindly fuck off and when you get there, fuck off again.

5. I watched that show where someone was taking the piss out of chronic illnesses, have you seen it? – Erm no, I haven’t. Weirdly enough, living through it isn’t quite as funny as it might seem!

6. I read an article about chronic illnesses. Has he tried taking herbal supplements/cod liver oil/having specific tests for deficiencies? – I appreciate you’re trying to be helpful, but we’ve probably read the same information and already tried it or discussed it with a medical professional.

7. How would you cope if you had a child? – Actually, whether we choose to have children or not, is absolutely none of your business. End of.

8. Since he’s been with you, he’s stopped coming out – Yeah weirdly enough, we don’t go out anywhere either. It’s not like we’re sitting in a pub somewhere having a great time laughing at how you all think he’s ill, while actually, we’re having the best time in loads of fancy places.

9. What if he doesn’t have a chronic illness and he’s actually just depressed? – Thanks for your clinical input there Dr Dickhead, we didn’t think of that! He’s under the care of actual medical professionals and has an actual diagnosis.

10. Imagine how amazing it’ll be when he gets better though – The thing is, not everyone recovers from a chronic illness and you’ve now implied that his life won’t be great unless he recovers, you nob. I get what you’re trying to say, but it’s possible he’ll never get better.

Are you with someone who has a chronic illness? Are you the one with the illness? What do you wish people would stop saying to you? Let me know in the comments below 🙂 x