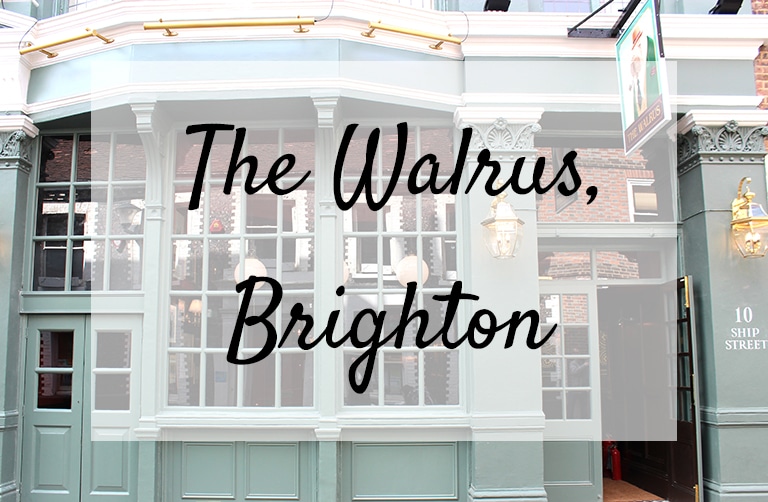 Down on Ship Street in Brighton there used be a place called The Smugglers; a sports pub with a nightclub above, aptly named The Loft, and 10 Below, a slightly smaller club below the main pub.

It closed down in 2015 and has now been reborn as The Walrus. I was invited to their VIP lunch to check out the new venue and sample some of the menu. Naturally, I took J with me 🙂I’d only ever been to The Smugglers once and couldn’t really remember it, but I was blown away how lovely The Walrus looked. It hadn’t just had a lick of paint but a whole new refurb!

On arrival we were taken upstairs to the dining area; it was decorated with old style paintings, barometers, a grandmother clock in the corner and an oppulent chandelier over one of the large tables.

Our lovely waiter came to take our order and admitted we were his very first customers!

For starters I ordered the pulled duck on toast with radish, kholrabi and a bean and fresh herb salad. It was full of flavour and I loved the side salad; it was so refreshing. My only criticism would be that my toast was some what extremely toasted and I had difficulty trying to eat it. 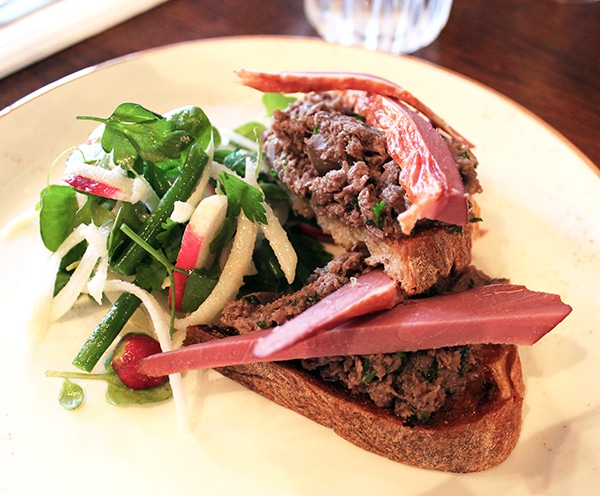 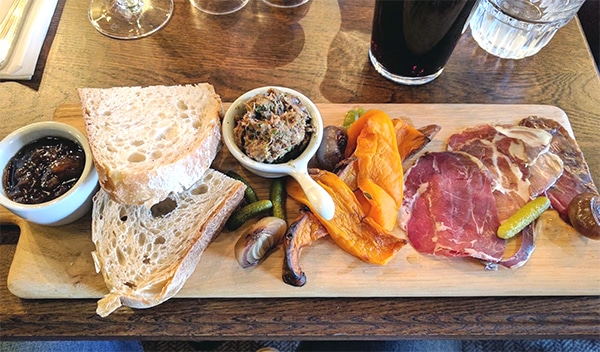 For our mains, we both went for the 9oz rib eye steak; it was so tender and delicious, probably because we went for medium rare like normal people (I’m pretty sure I heard someone ask for it well done, I mean who even does that?)  It came with chips and a watercress and shallot salad and we both chose the garlic and parsely butter to go on top! 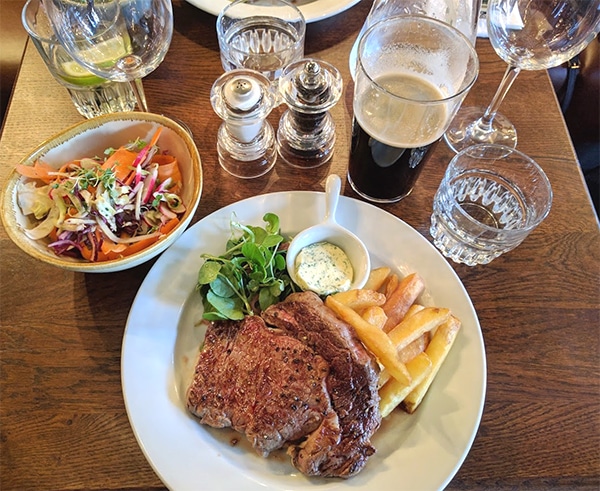 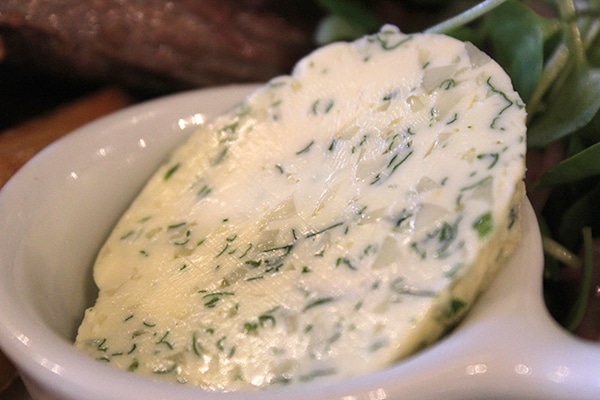 We also chose sides and J went for the summer slaw and I went for the buttered French beans and peas. To be honest, I was expecting the slaw to have mayo with it, but it seemed to be just a fresh salad instead. To be fair though, both sides were delicious, but mine was probably slightly better 😀 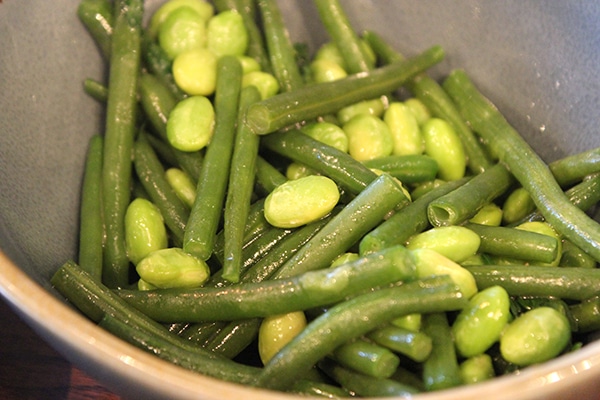 I didn’t think I’d be able to manage any more as I struggled to finish my steak, but as everyone knows, there’s a separate stomach for pudding so I knew I could fit some in 😉

My pudding was a dark and white chocolate brownie with vanilla ice cream topped with popping candy. The brownie was gorgeous and really rich while the ice cream was refreshing and creamy. The popping candy seemed to have gone a bit soft whilst on the ice cream so there wasn’t much of a pop, but it added an interesting texture 🙂 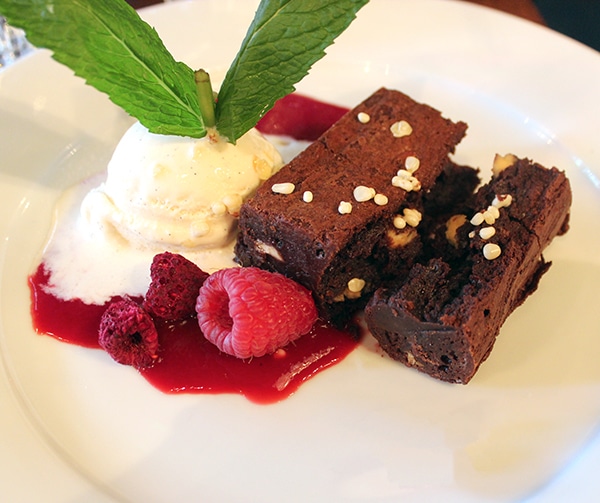 J chose the baked alaska which came with a mango coulis! I had some of his and I’m glad I went for the brownie. It was good, but as I’d never had baked alaska before, I was expecting the meringue to be hard and it wasn’t!! He thought it was delicious though and quite refreshing 🙂 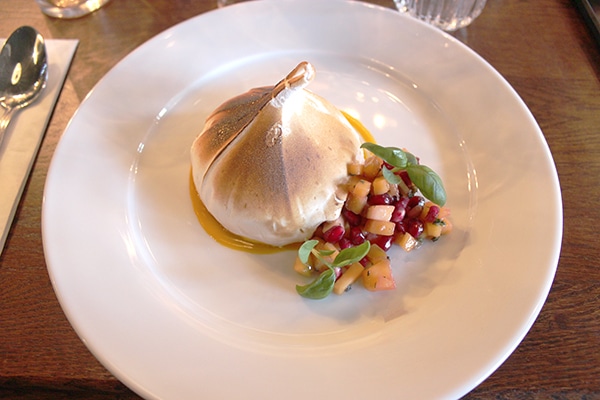 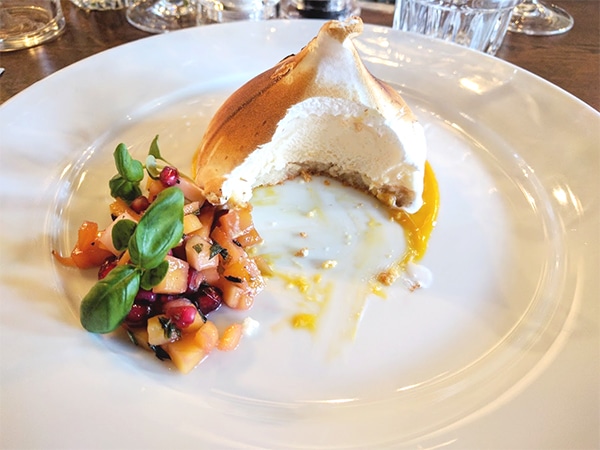 Overall we had a lovely meal and I would definitely recommend trying it out! I’d say it was more of a family-orientated place, somewhere you’d take your nan for a nice dinner out, a work’s do or a 50th birthday party, you know the kind of thing.

I just want to say a massive thank you to The Walrus for inviting us down; we had a really lovely time 🙂

Have you been to The Walrus yet? If not, would you now want to go? Let me know in the comments below 🙂 x

*We were invited by the venue to review but all views are my own. A lot of the photos were taken by J; he’s handy with a camera ♥