I went up to Wembley with Tania and we were probably the two most entertaining people on the train! We were so excited at one point we were miming All I Want For  Christmas Is You. We were also both sober. Go figure!

**all subsequent photos were taken by me. On a Nexus 5. In the dark. They’re not the best  quality. But Nickelback**

Unfortunately due to an accident on the train, we ended up getting into London a couple of hours late. Although we missed the support act, Monster Truck, we only had about 10 minutes to wait until Nickelback came on stage.

They played a diverse range of songs across their albums; including the three “biggest hits,” How You Remind Me, Photograph and Rockstar. They also played a couple of songs I must admit I’d never heard before; Lullaby and Edge Of A Revolution. But since the gig, Nickelback has been playing on repeat. Continuously. J must hate it. He’s not a fan. Weirdo.

The stage lighting and the videos playing on the big screens were beautiful. I think this is from If Today Was Your Last Day.

Nickelback are absolutely spellbinding live. They’re unbelievably passionate and it totally shows. They put their all into every song and make you feel like you’re part of one big amazing family. There was plenty of “between songs” banter and they’re actually really funny guys 😀 Who knew? 😉

I was made up that they finished on Burn It To The Ground. It was the perfect ending to the gig ♥ Afterwards, Tania’s boyfriend even got the setlist from the sound guys 🙂

No, wait. The best ending was on the way home when I got retweeted by them 😀 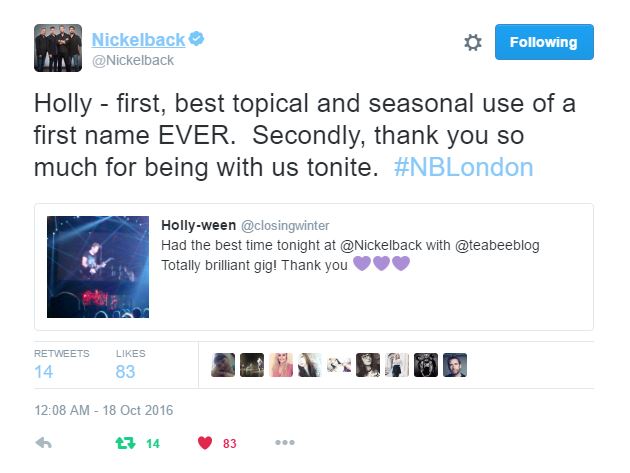 Who’s the best band/group/musician you’ve ever seen live? Who would you love to see? Let me know in the comments below 🙂 x