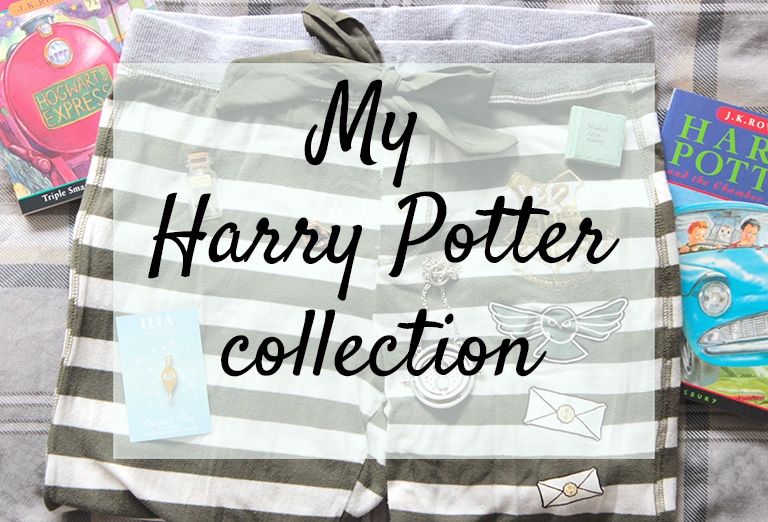 Having massively got back into Harry Potter recently, I thought I’d share my small (for now) collection with you.  This post was inspired by Fiona and you can check out her blog post here.

I own all the Harry Potter books (1 to 7) in the original children’s covers.  I bought Order of the Phoenix, Half-Blood Prince and Deathly Hallows in hardback at Tesco just after midnight each time they were released.  I recently bought books 1 to 4 on Ebay in paperback, brand new in a box set 😀  I’m currently re-reading Order of the Phoenix! 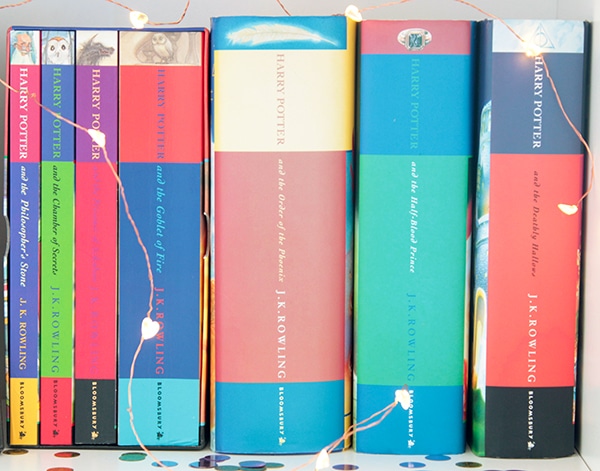 I own most of the films on DVD, except Deathly Hallows Part Two and I somehow have two copies of the Goblet of Fire (sorry to whoever I stole this off). 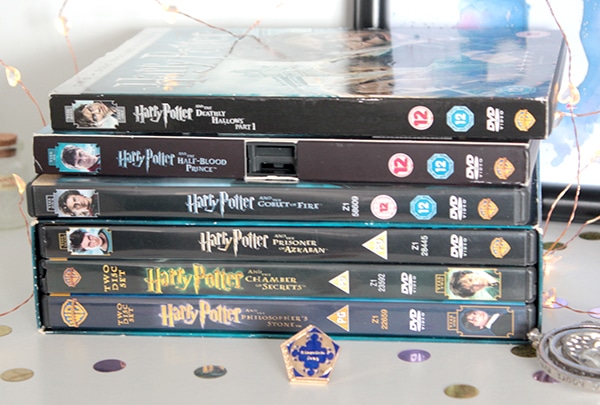 I got both these t-shirts at the studio tour; the first is a black t-shirt with a quill across it.  In grey writing it says “I must not tell lies” and it also says that in blood across the chest.  I love this top as it’s pretty subtle and it’s one of those quotes that if you know, you know. 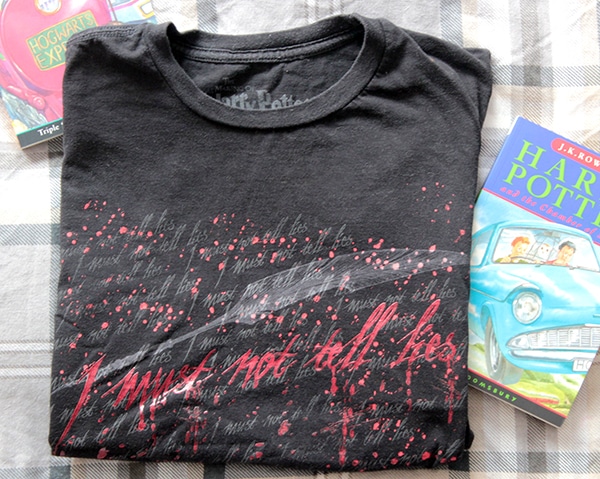 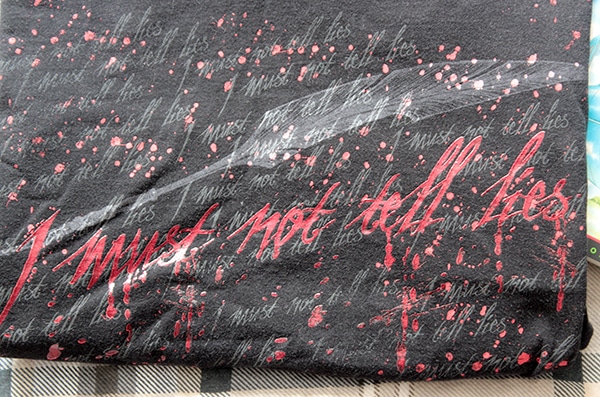 The second is a grey t-shirt with the Dark Mark on it.  Unfortunately I grabbed this from the gift shop and didn’t try it on before I left.  It’s a tight-fitting t-shirt and I picked up the wrong size 🙁  Very kindly the studio tour said I could send it back to exchange it and, although I got a L, it’s still a little snug.  For me to wear it and not feel self-conscious, it works best under a zip up hoody or my dungarees. 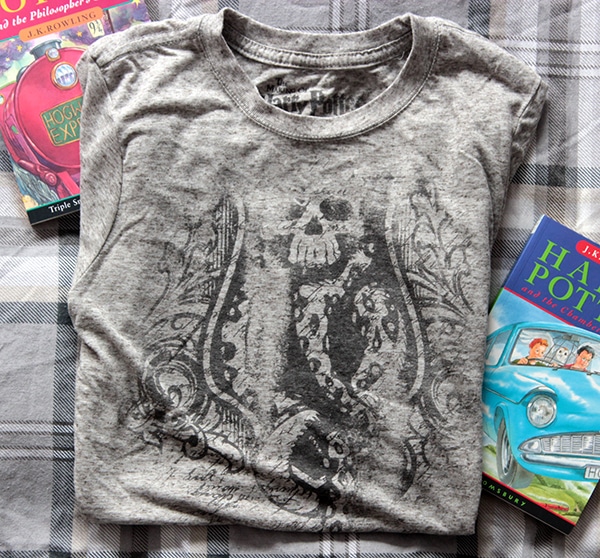 I also own quite a few pyjamas, thanks to Primark and their incredible range.  The first pair of bottoms I ever picked up was the Marauder’s Map pair.  I’d never owned a pair of cuffed bottoms before but I love them.  I buy my pyjama bottoms in a medium (size 10-12) as I don’t really like them too loose!! 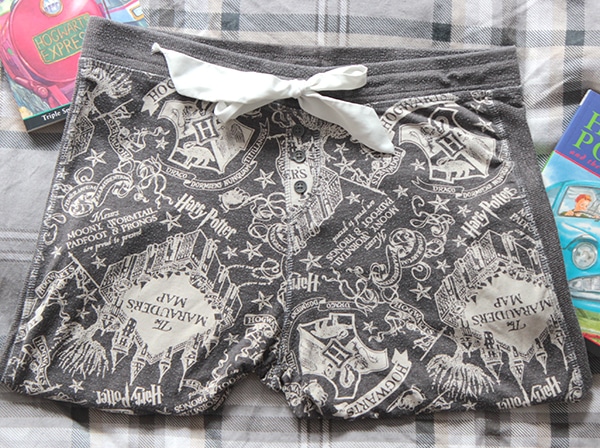 I then bought a pair of maroon stripey Quidditch cuffed bottoms that have 1972 embroidered on them with a Snitch, a planet and some stars 🙂 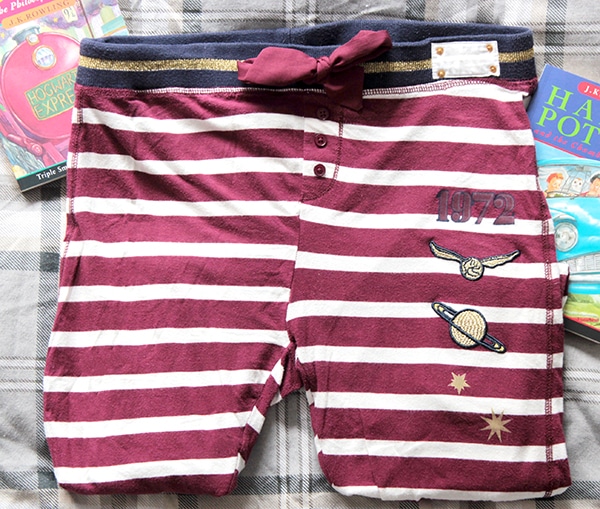 My newest ones are these very cute green stripey bottoms with the Hogwarts crest, an owl and some letters on them. 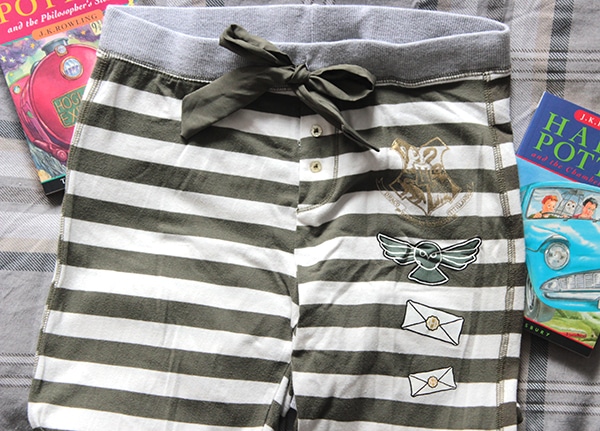 I also picked up a Slytherin set which comes with a gorgeous dark green top with the Slytherin crest and traits on it, while the grey bottoms have stars, snakes and Harry Potter written on them. 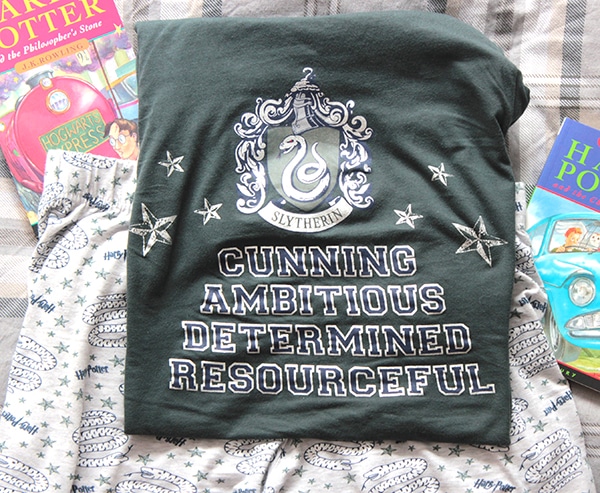 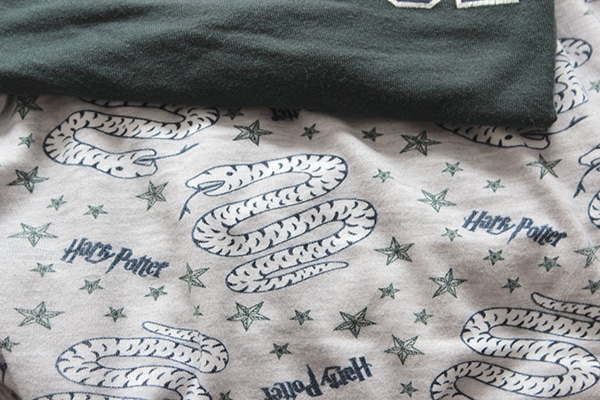 As if I didn’t have enough pyjamas, I persuaded one of my amazing friends to head to the Primark in London to get me a pair of the limited edition Honeydukes sets 😀 I absolutely love them!! 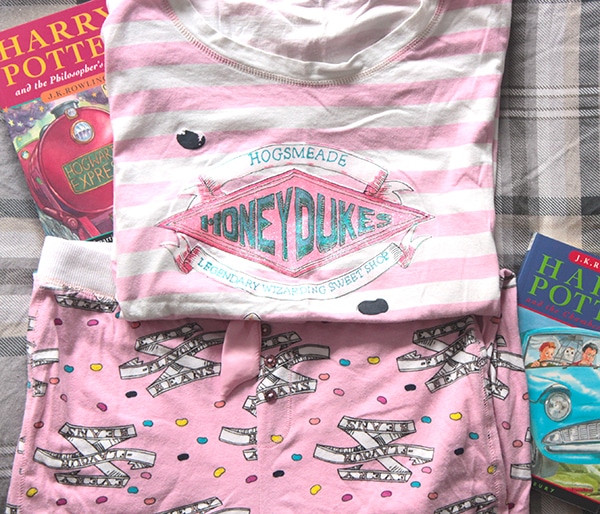 Then, thanks to the heat wave of 2018, I then picked up a beige pair of shorts with the Hogwarts crest in maroon on one side and a flying key on the other!  They were £3.50 but when I went to the till, they were only £2!! 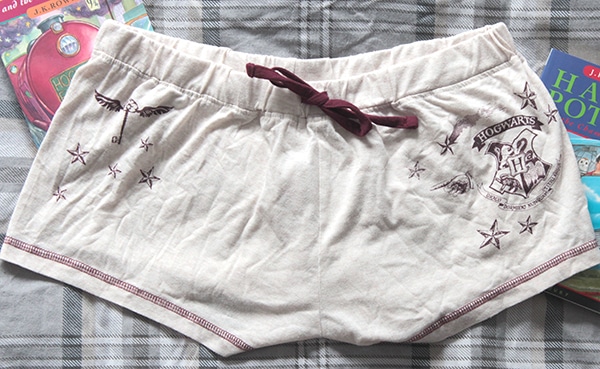 I also picked up these amazing trainers from Primark too.  They’re dark blue with gold symbols on them.  They look like Converse but have Harry Potter written on the back and they only cost £8!!  I do have another pair of HP trainers, but as they’re a birthday present, I’m not allowed to have them until next week!! 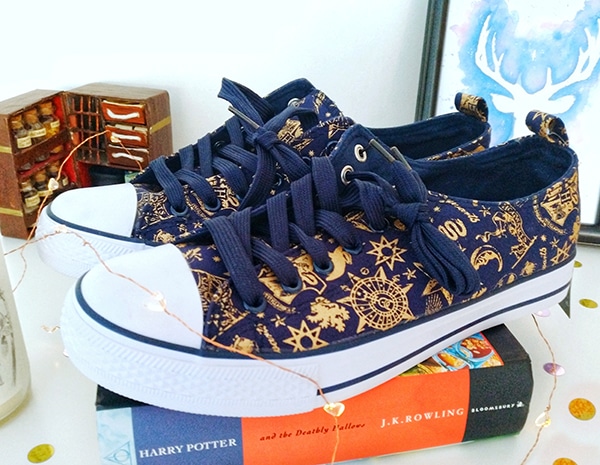 When I first moved in with J and was sorting out my boxes of stuff, I nearly threw this away but he stopped me and I’m so glad he did!!  I used to belong to Craftster.org, a crafting website that often did swaps for people.  I joined a “one tiny thing” Harry Potter swap and this is what I got.  It’s a tiny trunk for potions 😀 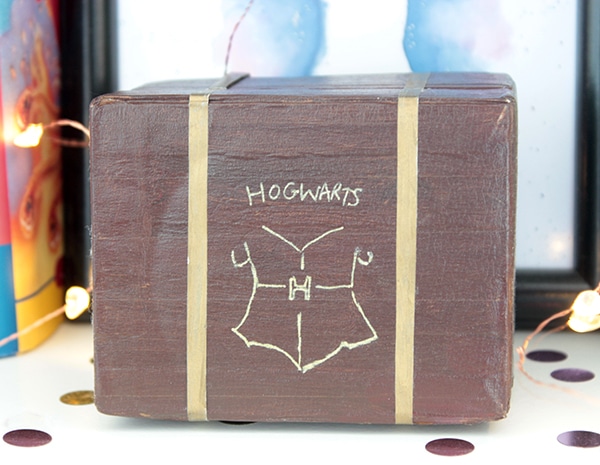 Inside there are potion bottles on the left-hand side full of ingredients; powdered asphodel root, belladonna, moonstone, scarab beetle shells, unicorn tail hairs and bezoars! 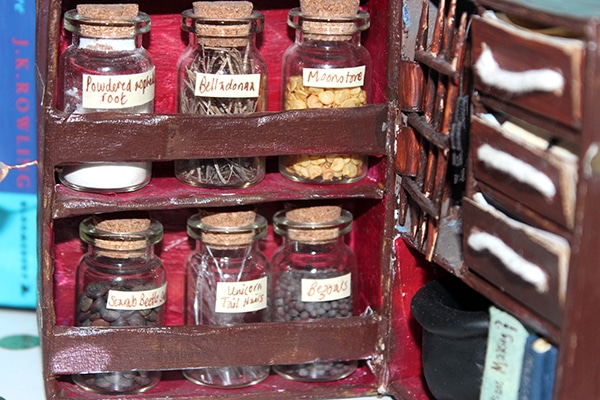 On the right is a little cage full of bats, the top drawer has instructions in, the middle drawer has parchment and the bottom drawer holds a knife and a polymer clay pestle and mortar. 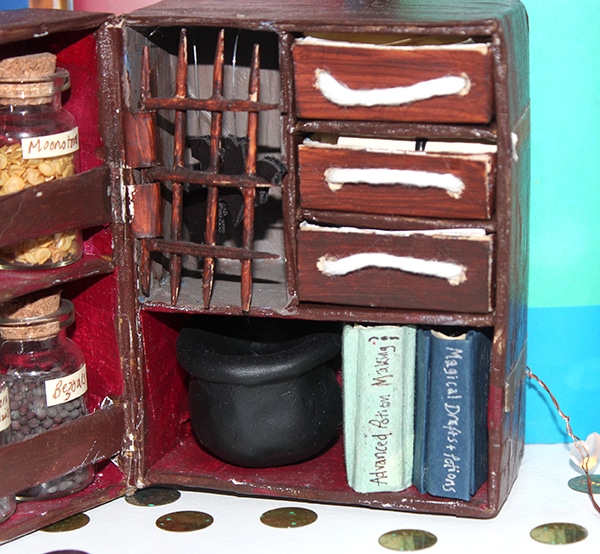 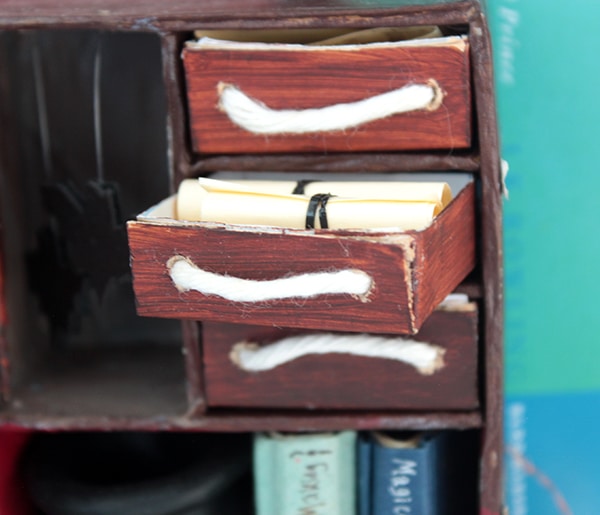 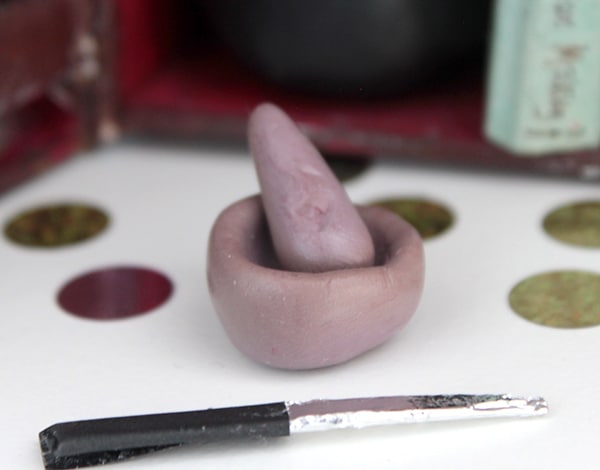 Below the drawers is a polymer clay cauldron and Advanced Potion Making and Magical Drafts & Potions books.  Isn’t it just the most incredible thing you’ve ever seen??  I can’t believe someone actually made this for me!! 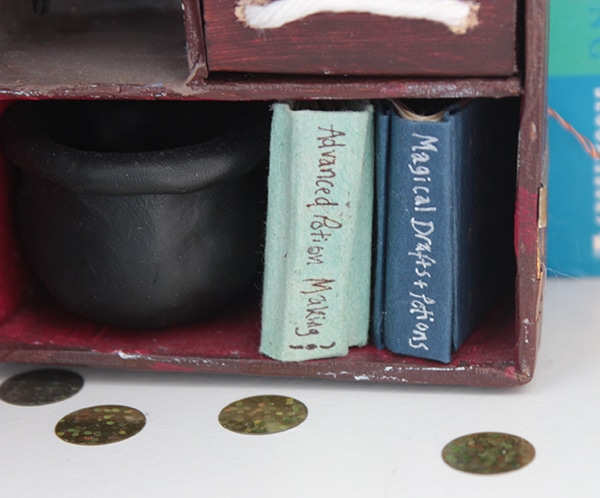 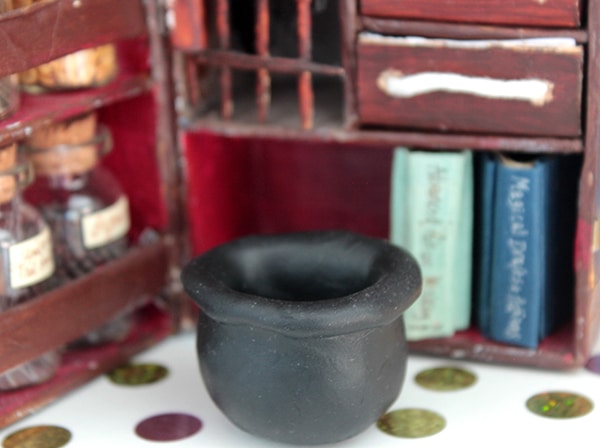 I also own this gorgeous patronus stag print from Tarnya.  I absolutely love it and, along with the trunk, it has pride of place on the Harry Potter shelf of our bookcase!! 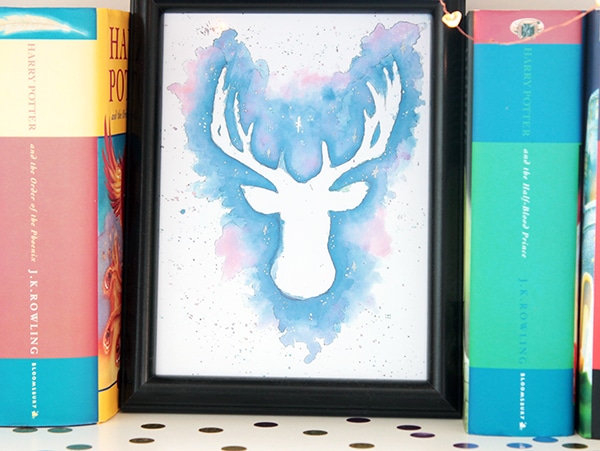 I recently bought a Time Turner, although as I’m not a fan of gold, I opted for a silver one!  The elements all turn and the hourglass has white “sand” inside! 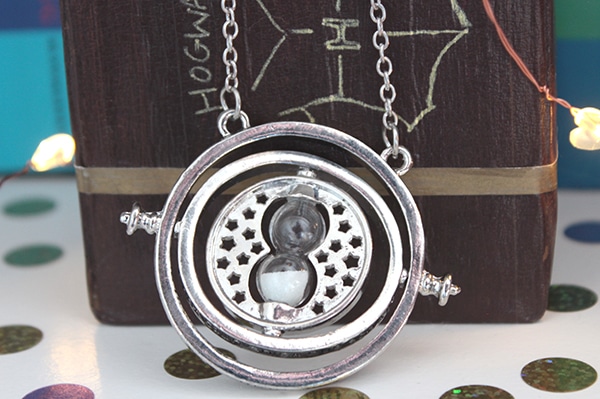 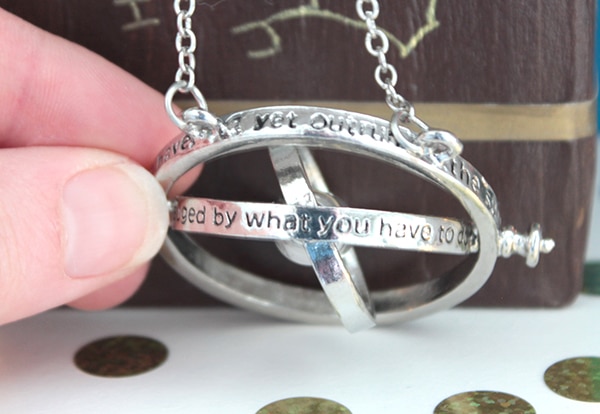 While my friend was in Primark getting me the pyjamas, she also picked me up the Honeydukes pin set 😀  I love the chocolate frog box and the Bertie Bott’s beans!! 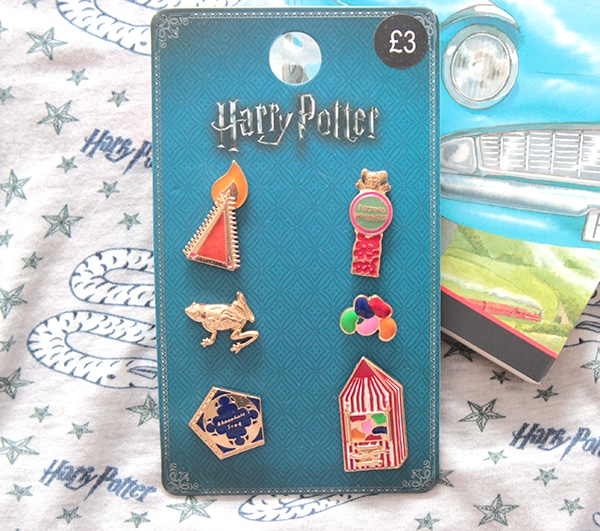 I also ordered myself a Felix Felicis potion enamel pin from Lula Rocks which arrived last week!  I absolutely love it, it’s so pretty and I love that the gold shimmers when you move it 🙂  I don’t think she has any left now, but she does have a super cute polyjuice potion pin 🙂 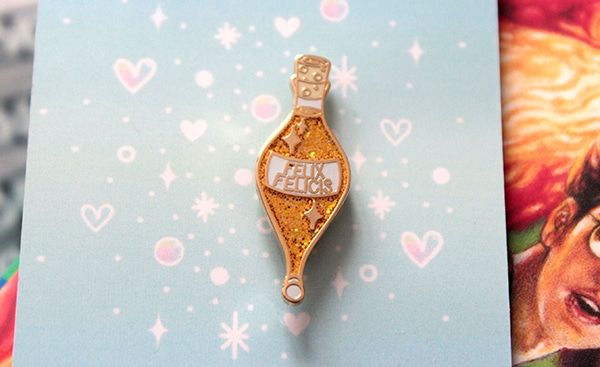 What Harry Potter items do you have in your collection?  Let me know in the comments below 🙂 x