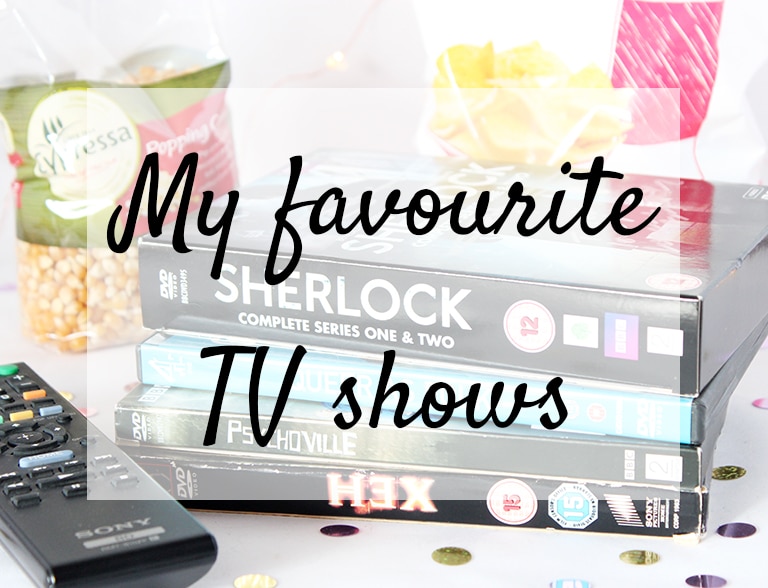 As the the title says, this post is about my all-time favourite TV shows!

Buffy The Vampire Slayer (7 Seasons) / Angel (5 seasons) – Buffy is a 16 year old girl who moves with her mum to Sunnydale, CA after burning down her previous school’s gym. She seems like a normal teenager, except she’s not, because in every generation there is a chosen one. She alone will stand against the vampires, the demons and the forces of darkness. She is the slayer. Not only is Buffy the slayer and is being tutored by Rupert Giles, she’s also trying to live a normal teenaged life with her best friends, Willow and Xander. She also falls in love with Angel, a vampire! There are loads of funny moments, heart-breaking scenes and dark times!

At the end of season 3 of Buffy, Angel leaves town and winds up in LA. and gets his own spin-off show which often felt a lot darker than Buffy in parts. There are lots of twists and turns, a lot of character development, plus some familiar faces from Buffy!!

Hex (2 seasons) – Hex was a British series set in a boarding school. The main character, Cassie, thinks she’s perfectly normal but discovers she’s actually descended from some powerful witches and soon comes to the attention of Azazeal, a dark handsome stranger with sinister intentions! If you’re into the supernatural, this one is well worth a go. However, be warned because series 2 ended rather abruptly because the show got cancelled before they could start filming series 3.

No Offence (3 seasons) – No Offence was created by the same guy (Paul Abbott) who wrote Shameless and follows a team of Manchester detectives. I thought season 1 was the best, where the team were hunting a murderer who was killing girls with Down’s Syndrome. It’s definitely darker than Shameless but shares the same sort of humour, so I think if you liked that, then you’ll love this.

One Tree Hill (9 seasons) – Set in Tree Hill, North Carolina, the series follows Lucas Scott, a high school student who loves basketball. However, his dad left his mum before he was born and had another son, Nathan, who happens to be the star of the basketball team and absolutely hates Lucas. When Lucas gets a chance to try out for the team, it throws everyone’s lives into chaos!

Psychoville (2 seasons) – It’s a very dark psychological thriller which follows the lives of several (very odd) people whose lives are all interconnected when a mysterious letter arrives for them saying “I know what you did”. It’s disturbing with very dark humour, but I found it brilliantly funny! It came from two of the creators of the League of Gentlemen, Reece Shearsmith and Steve Pemberton.

Queer As Folk (2 seasons) – This exploded on to Channel 4 back in 1999 and follows the story of gay best friends, Stuart and Vince, and the change in dynamic to their friendship when 15 year old Nathan comes on the scene. It’s mainly set in and around Canal Street, Manchester, which is a well-known gay-friendly area of town. There was an American version, which unsurprisingly was a bit shit!

Sherlock (4 seasons) – The famous detective has been brought into the 21st century and starred Benedict Cumberbatch as Sherlock and Martin Freeman as John Watson who had brilliant onscreen chemistry. Sherlock helps London Yard to solve impossible crimes in his incredibly unique way and, most of the time, you’re still left guessing until the very end. Each episode is 90 minutes long so they feel like watching a film!

Shows I haven’t finished watching yet:

Blacklist (8 seasons so far) – I absolutely love James Spader and he’s absolutely excellent in this as the FBI’s most wanted criminal, Raymond (Red) Reddington. After surrendering himself, he makes the FBI an offer they can’t refuse, but only if he works with a team which includes a new recruit called Elizabeth Keen. The team is charged with bringing down criminals that are part of Reddington’s “Blacklist” and it soon becomes clear Red has his own agenda for getting rid of each one.

Lucifer (6 seasons) – This is the newest TV series that I’m absolutely obsessed with. Lucifer is bored with ruling hell so he decides to take a vacation in LA and becomes the owner of a nightclub called Lux. In the first episode, someone he know dies and he teams up with Detective Chloe Decker to help solve her murder. This leads to him becoming a civilian consultant with the LAPD and using his powers to get information out of suspects. *At the time of updating this post in November 2020, there are 6 seasons planned, but the second half of season 5 hasn’t been filmed yet due to Covid19*

Quantum Leap (5 seasons) – This was around in the late 80s and centres around Sam Beckett, a physicist who leaps through spacetime during an experiment in time travel and ends up in someone else’s body. He realises he needs to correct the person’s mistakes before he can leap into another body and hopefully one day leap back into his own body. He gets help from Al, who’s back in the future but can appear in the form of a hologram that only Sam can see.

Westworld (4 seasons so far) – When J found out they were making a series based on the old 70s film, he made us watch it. It felt really dated and I thought the ending was a little boring, but I’m really glad the TV series has been much more exciting. It’s based around a theme park called (unsurprisingly) Westworld where customers pay to stay in an authentic-looking Wild West, complete with robots (hosts) to look after everyone’s needs and desires. It’s not long before the company realise there’s something wrong with some of the robots!

Have you seen any of these shows? What’s your favourite show? Let me know in the comments below 🙂 x