I’ve been pretty quiet on social media over the past month as house renovations have taken over our lives. The house is currently in chaos which makes my brain feel like chaos. Does anyone else ever feel like that? In amongst the chaos, there were some good moments. I thought I’d sit down to write a quick catch-up post 🙂

Anyway, here’s what I got up to in June:

I finally got J to cut my hair again for me! I decided not to colour my hair until he’d done or I’d have wasted loads of product! It looks so much better now and he did a pretty good job of cutting it 🙂

My new pink Adidas trainers! I’ve been wanting a pair of Adidas Gazelles for years but couldn’t justify spending over £75 on a pair. I saw Adidas were having a sale, with an extra 20% off, so I had a look and saw these ones! They’re similar to Gazelles but without the wording down the side. They were only £25! They’re so comfy, I love them 🙂

I recently entered The Whimsy Witch Co’s giveaway to win a bundle of her mini pins. I only went and won!! My favourites are the cat plate and the poison apple, what about you?

Since working from home, I was using our dining room table to work on. It was okay, but it was a bit high so it wasn’t terribly comfortable for long periods. J was looking for a new desk online for me and spotted the same desk he has (the Fredde from Ikea) on eBay! He bid on it and we won it. The only issue was that it was pick-up only from Lymington, which is about a 4 hour round trip from Brighton. Luckily we were both able to take the afternoon off, so off we went! We not only got my desk, but we drove through the New Forest and got to see some New Forest ponies 🙂

After living here for 7 years, I finally got so tired of the kitchen walls looking a state, I booked a plasterer to come and plaster the walls and ceiling in July!! Of course it wasn’t just as simple as taking a few cupboards off the walls, it’s been a massive task to get the kitchen ready!

We were going to put plasterboard over this wall to hide the pipes, but decided to move the pipes instead, in case we ever needed to get to them! As we decided not to plasterboard it, we removed the wooden battens. 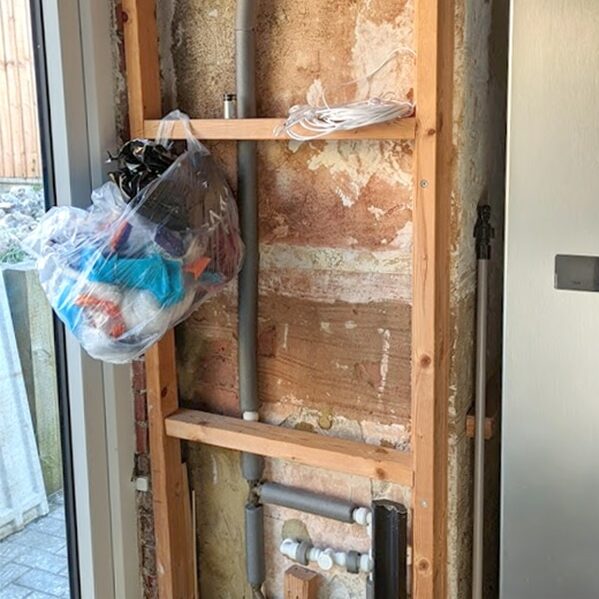 We then took the plasterboard off the other side and realised that the inside wall had been built directly against the outside wall with no cavity or insulation. 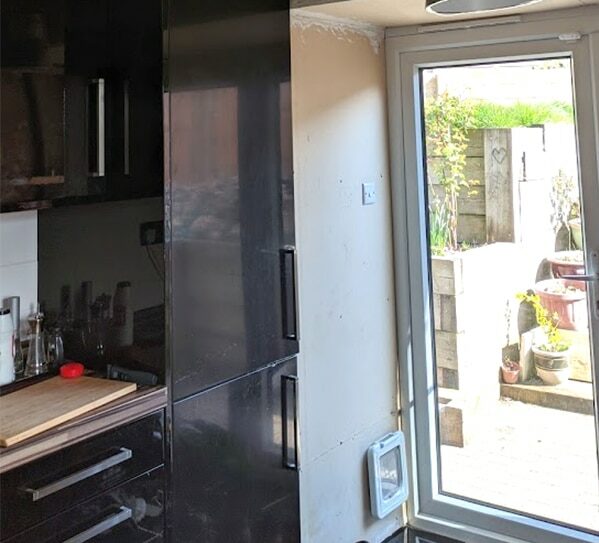 J had to knock out a massive channel to rebuild a wall with a cavity and then had to move the hole for Mr Bear’s cat flap!

We then had to do the same thing on the wall where the pipes had been!

I spent a long Saturday afternoon knocking out all the old plaster from the window surround so we can tile it at some point. 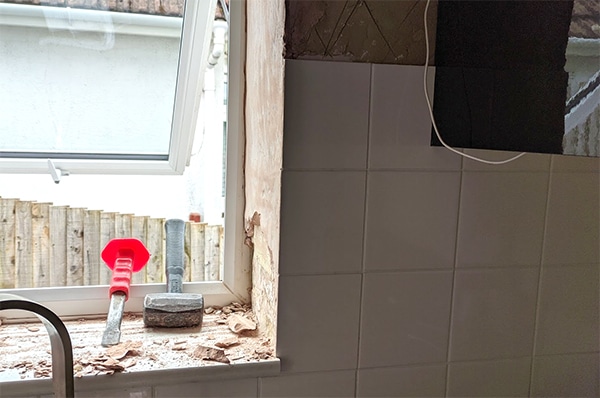 The final job was to remove all the top cupboards, the larder and the air vent over the hob! I can’t wait for it to all be over so there aren’t boxes of plates and food everywhere!! We’re going to paint the walls white (bye bye dirty yellow!!!!) and then paint the cupboards white to brighten up the space even more 🙂

How was your June, did you do anything lovely? Let me know in the comments below 🙂 xx