Well whoops a bloody daisy, I missed last month’s catch-up because I couldn’t be arsed. Sorry! To be fair though, it has been a bit manic in our house for a while and things are only just winding down, which is why I’ve only just had the chance to sit down and catch you all up!

Usually for my birthday, I pop into Asda and buy one of their “Whoops” cakes. They’re the discounted ones that someone’s drop-kicked on the floor or someone has picked up a cake and Woody’s face has somehow slid off. This year I decided I wanted a full-priced cake because I wanted something cute and Instagrammable (nothing says that like a shark cake), so I ordered it online.

However, when it arrived the poor shark looked like it had been in the wars (J managed to fix it up so I could get a photo), so we got a refund on it! Waheyyyy!

I was sent this amazing box of donuts by one of my oldest friends (it’s been 23 years since we first met at school) for my birthday. She knows I absolutely love doughnuts so she sent me these from Doughnut Time! They were absolutely divine. I’m not even sure I could pick a favourite because they were all delicious! Oh and yes, I did share them with J!!

My parents sent me a massive food hamper for my birthday, which was so lovely! There were loads of savoury bits like brie, chutney, sweet chilli crisps, chilli & lime peanuts, rosemary focaccia bread thins, and tomato and basil twists, plus loads of sweet treats too; triple chocolate cookies, a bar of chocolate, popcorn, a steamed lemon pudding and a bag of fizzy cola bottles! There was even a bottle of prosecco too 🙂 J and I ended up having the best picky lunch for my birthday 🙂

This is probably one of my most favourite possessions right now. It’s a Mickey and Minnie sweet treats Disney Loungefly wallet from Very Neko*.

It’s a gorgeous, incredibly well-made faux leather wallet with Micky and Minnie cupcakes and donuts all over it! The sprinkles are cut into the wallet, which is such a cute detail.

The main wallet part opens with a popper and the ID section has a little cut out Mickey! The inside fabric is sprinkles and little Mickeys and the card holder section looks like dripping chocolate; I absolutely love it!! There’s loads of space for all my cards, plus a section for money and receipts.

I also got this adorable little Pop! Lilo keyring. She’s so cute and has a little stripey swimming costume on and a little bag over her shoulder. She’s also holding the tiniest little camera! This keyring is going straight on my keys 🙂

Very Neko* have so many incredible gift ideas for fans of Disney, Marvel, Harry Potter, Sanrio and more. They have a massive collection of Loungefly products, including exclusives. They also sell Funko Pops, Cakeworthy clothing and Danielle Nicole bags.

I also might have accidentally changed my hair again because I was getting bored of the purple. I tried stripping the colour out but it went this super cute pastel mint green colour instead!

I kept that for a couple of weeks before I gave in and covered my hair in Crimson Red from Knight & Wilson. My natural roots went really dark red, while the rest of my hair went a really cool red/pink/purple shade! I think at some point I might buy some permanent red and put it on my hair but for now I’m loving this colour!

So last time I posted a chatty catch-up, we were about to have our kitchen plastered. J and I were up till about 1am on the day the plasterer was due to arrive finishing off all the last little bits. Then at 8am, he didn’t show up!! I sent him messages and a voicemail but he just ghosted us completely! What an absolute dickhead! I was absolutely fuming, especially as I was so tired and we’d worked so hard to get everything sorted in time.

Luckily we found another amazing local company who had some space and, three weeks later, they showed up to do the plastering. They were really lovely and did a fantastic job! It only took them two days to finish the work. On the first day they overboarded the kitchen ceiling so it was level as J and his dad had previously added some plasterboard to the ceiling which was slightly higher than the original (yellow) ceiling.

They then prepped the kitchen walls before coming back the following day to finish them off.

This was the wall that broke me lol. I hated going in and out of the kitchen, seeing it every day. I even tried to plaster it myself (the white patches) but I didn’t have the patience to carry on with it! I’m so happy that it’s now perfectly straight and smooth 💕

Because it was so hot that week, the plaster only took about 3 or 4 days to completely dry!! They also plastered the bathroom ceiling for us 🙂 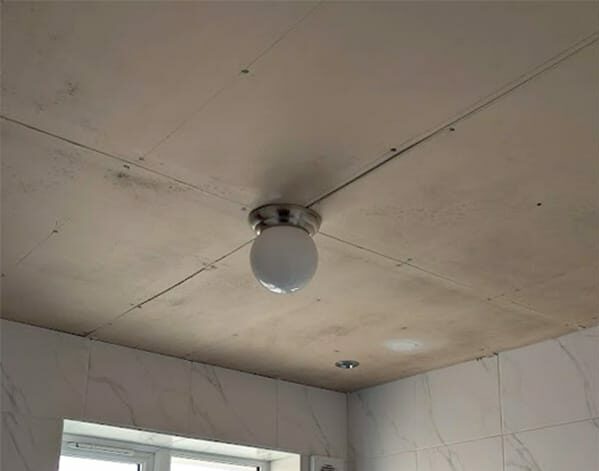 I’ve now painted the ceiling, scraped all the paint off the tiles (because I was too lazy to put masking tape on them) and J put all the light fittings back in. Now I just need to fill in the gaps with sealant and it’ll be finished!

We also had our heating installed at the end of July. When J bought the house, he installed underfloor heating downstairs (and no heating upstairs) but it’s so expensive to run that we never use it! We just use convector heaters in whichever room we’re using at the time (which is horrible when you’re nice and warm in the lounge but need to walk through the hallway into the bathroom to do a wee!!)

The air source heat pump was installed outside as it extracts heat from the outside air (using a giant but incredibly quiet fan) and converts this into heating and hot water for your home.

The water cylinder was installed directly above the heat pump up in the eaves of the roof and all the pipework was connected under the floorboards upstairs.

We got a mixture of traditional and vertical radiators to fit our spaces, it’s just a shame we’re going to have to wait a few months until we can try them out properly 😂😂

*Very Neko kindly sent me some gifted products but views, and love of Disney, are my own.