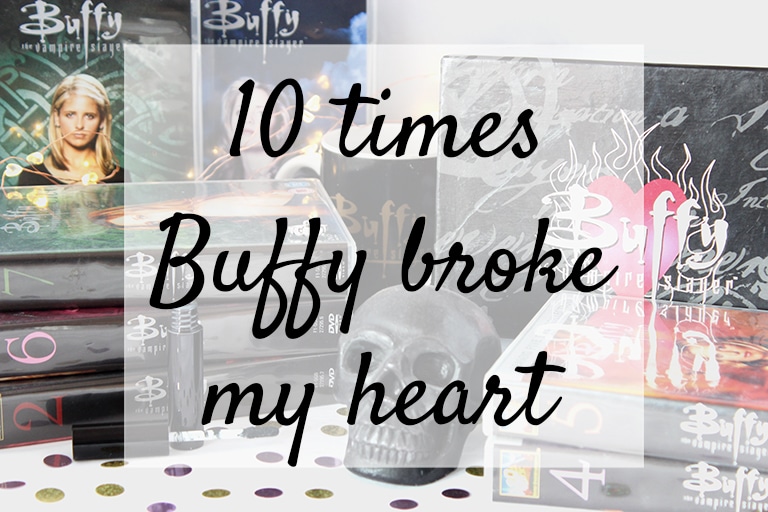 If you know anything about me, you’ll know that Buffy The Vampire Slayer has always had a special place in my heart. I started getting into it back in 2000 and the first episode I ever watched was Halloween (season 2). I know, it’s shocking that I didn’t start watching it right from the off, but I was soon hooked and have been a massive fan ever since.

(Please note that the main bulk of this post contains massive spoiler alerts, so if you’ve never seen it and think you might want to, this post is definitely not for you, sorry! ♥) If you love Buffy, then read on 🙂Buffy was a tremendously ground-breaking show at the time, paving the way for strong female leads. It was filled with sassy quips, plenty of demons and a lot of teen angst. It’s definitely one of my top go-to series to put on, especially if I’m in need of a really good cry. So here are my top ten moments when the show broke my heart (in order of season).

Anya: I don’t understand how this all happens. How we go through this. I mean, I knew her, and then she’s- There’s just a body, and I don’t understand why she just can’t get back in it and not be dead anymore. It’s stupid. It’s mortal and stupid. And-and Xander’s crying and not talking, and-and I was having fruit punch, and I thought, well, Joyce will never have any more fruit punch ever, and she’ll never have eggs, or yawn or brush her hair, not ever, and no one will explain to me why.

Dawn: I don’t have anybody.
Buffy: What?! Of course you do. You have me!
Dawn: No, I don’t. You won’t even look at me. It’s so obvious you don’t want me around.
Buffy: That’s not true.
Dawn: Yes it is. Mom … died, and it’s like you don’t even care.
Buffy: Of course I care. How can you even think that?
Dawn: How can I not? You haven’t even cried. You’ve just been running around like it’s been some big chore or something. Cleaning up after Mom’s mess.
Buffy: Dawn … I’ve been … working. I’ve been busy, because I have to-
Dawn: No! You’ve been avoiding me.
Buffy: I’m not! … I have to do these things, ’cause … (crying) ’cause when I stop, then she’s really gone. And I’m trying. Dawn, I am, I am really trying to take care of things, but I don’t even know what I’m doing. Mom always knew.
Dawn: Nobody’s asking you to be Mom.
Buffy: Well, who’s gonna be if I’m not? Huh, Dawn? Have you even thought about that? Who’s gonna make things better? (crying harder) Who’s gonna take care of us?
Dawn: Buffy…
Buffy: I didn’t mean to push you away, I didn’t. I just, I couldn’t let you see me.

Xander: Uh, I’m just thinking about the girls. It’s a harsh gig, being a potential. Just being picked out of a crowd. Danger, destiny. Plus if you act now, death.
Dawn: They can handle it.
Xander: Yeah. They’re special, no doubt. And the amazing thing is, not one of ’em will ever know. Not even Buffy.
Dawn: Know what?
Xander: How much harder it is for the rest of us.
Dawn: No way. They’ve got…
Xander: Seven years, Dawn. Working with the Slayer. Seeing my friends get more and more powerful. A witch. A demon. Hell, I could fit Oz in my shaving kit, but, come a full moon, he had a wolfy mojo not to be messed with. Powerful. All of them. And I’m the guy who fixes the windows.
Dawn: Well. You had that sexy army training for a while, and the windows really did need fixing.
Xander: I saw what you did last night.
Dawn: Yeah, I… I guess I kinda lost my head when I thought I was the Slayer.
Xander: You thought you were all special. Miss Sunnydale 2003. And the minute you found out you weren’t, you handed the crown to Amanda without a moment’s pause. You gave her your power.
Dawn: The power wasn’t mine.
Xander: They’ll never know how tough it is, Dawnie. To be the one who isn’t chosen. To live so near to the spotlight and never step in it. But I know. I see more than anybody realises because nobody’s watching me. I saw you last night. I see you working here today. You’re not special. You’re extraordinary.
Dawn: Maybe that’s your power.
Xander: What?
Dawn: Seeing. Knowing.

What are your saddest or favourite Buffy moments? Let me know in the comments below 🙂 x