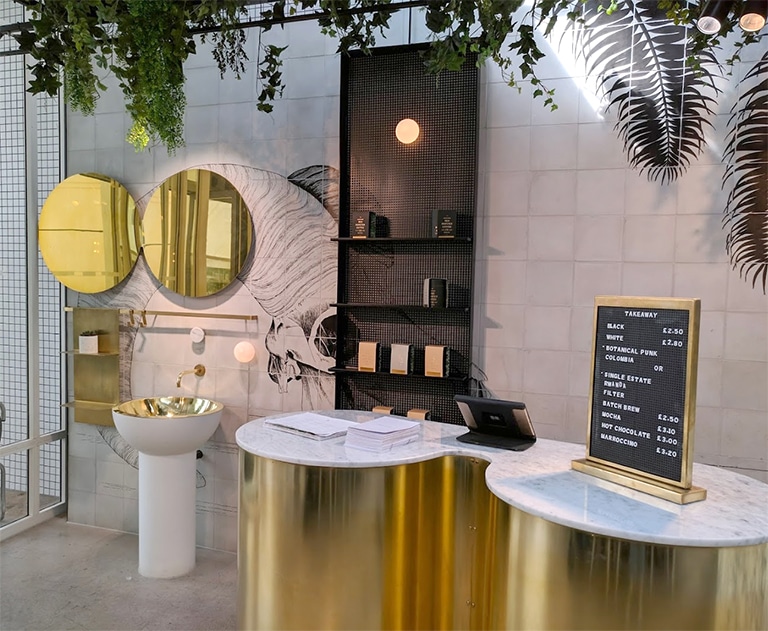 Recently I finally got to meet Violet, Lyndsay‘s beautiful little girl. I can’t believe she’s six months old already!! We decided we were going to meet up over brunch, so what better place to do it than the new and improved Redroaster at the bottom of St James’ Street?

This place has been transformed into a café full of insta goals; marble, gold accents and succulents everywhere. The bathroom holds the honour of being the most instagrammed in Brighton! It looks absolutely stunning. 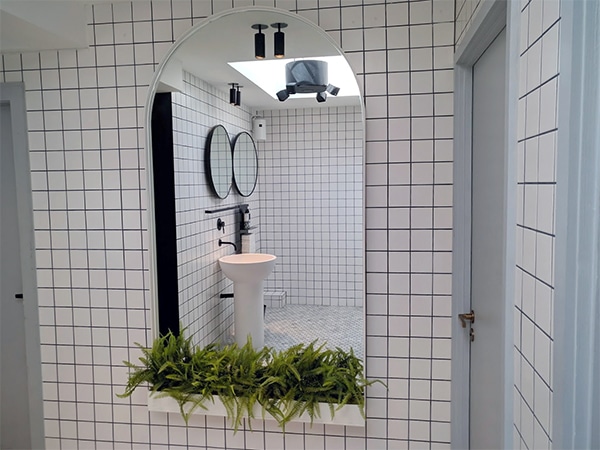 There are also large trees growing about the place and two outdoor seating areas; one at the front and one at the back. They also had this massive “The beach is boring” sign, which I thought was interesting considering they also own a café on the seafront!! 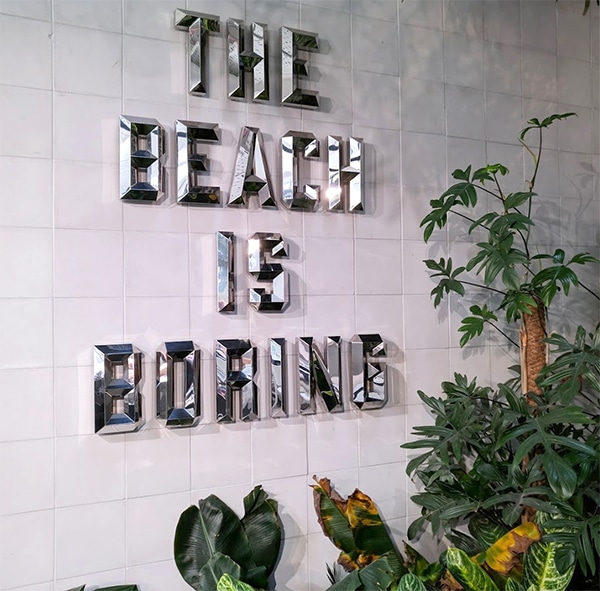 I went for a latte while Lyndsay opted for a cappuccino, both arrived in quick time and looked stunning! 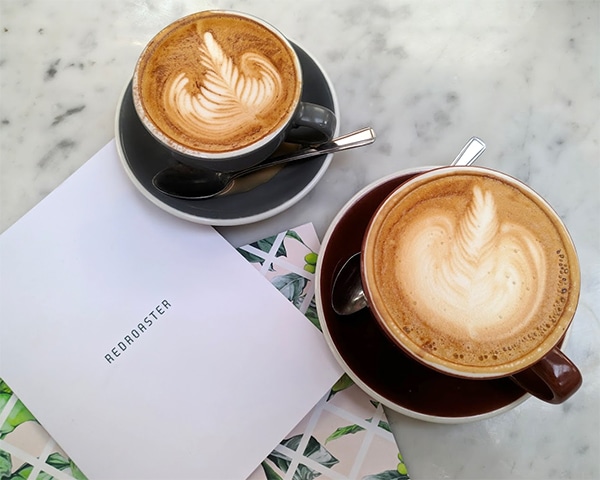 For brunch I picked the organic eggs any style (scrambled please) on sourdough bread for £5.90 and add roasted mushrooms for an extra £2.20, although I do have to wonder if three mushrooms really equated to £2.20 as they didn’t seem particularly special in any way. The scrambled eggs were cooked perfectly though and had added pumpkins seeds on top. I think. It wasn’t on the menu and I forgot to ask. 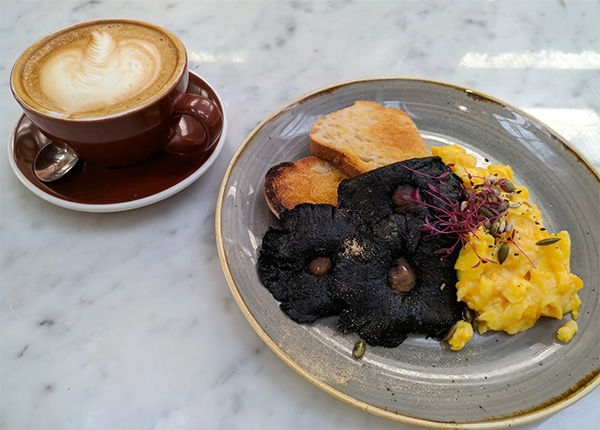 Lyndsay chose the breakfast board that included boiled eggs, an English muffin, avocado (very blogger), house granola, yoghurt and a shot of red juice for £9.90, with added salmon for an extra £3. 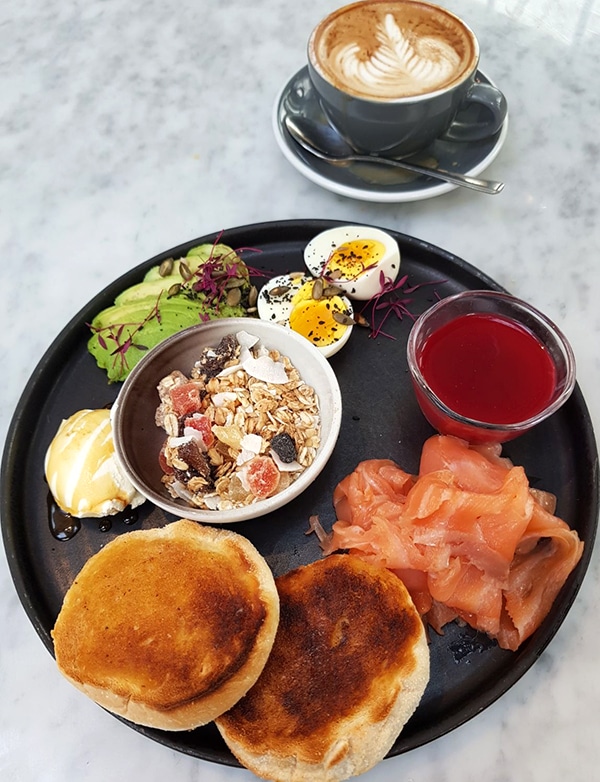 After eating brunch, I decided that I needed a pudding, so Lyndsay joined me because I’m such an enabler. I had the lemon cheesecake with matcha tea marshmallow and Lyndsay had the churros with salted caramel and whipped banana. 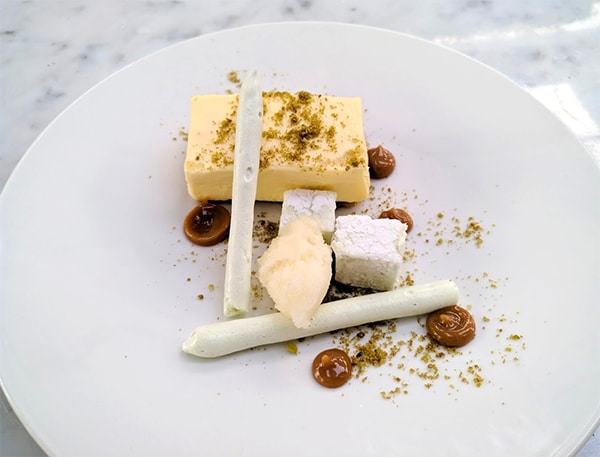 I really enjoyed mine, there was some sort of sorbet on the plate which was delicious and the cheesecake was incredibly smooth and creamy, I could have easily had another one!!

Lyndsay was a bit underwhelmed by hers, the churros were plain and hard while the whipped banana was “alright”. 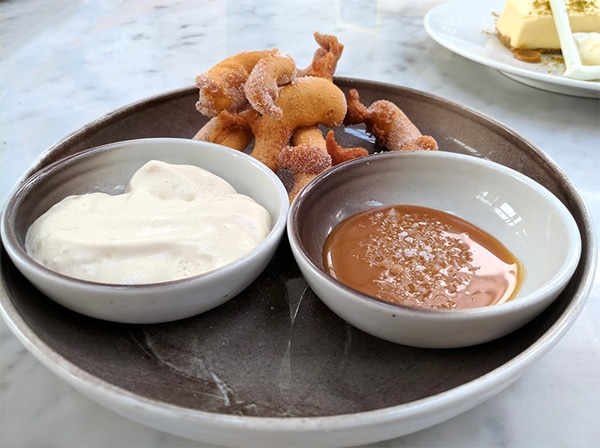 We were greeted with friendly, smiling staff and we asked for a table where we’d have room for a pushchair. We were given a lovely table near the front of the café where it wouldn’t be in the way. Then we asked for a highchair for V. We were told someone would get us one. It didn’t arrive, so we asked someone else. “Yep, not a problem”, yet we still saw no sign of a highchair. After the third time of asking someone else and it still not being delivered, we gave up asking and I happily sat LV on my lap for a while for cuddles. 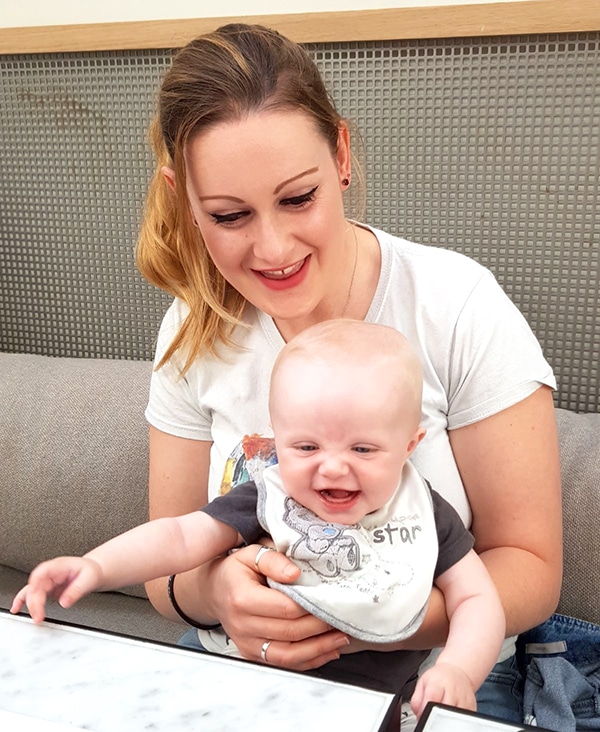 Then it got a bit weird. Firstly we got asked three times if everything was okay and yes, thank you, everything was fine. It was unusually quiet when we went so I wonder if the staff were struggling to find things to do. 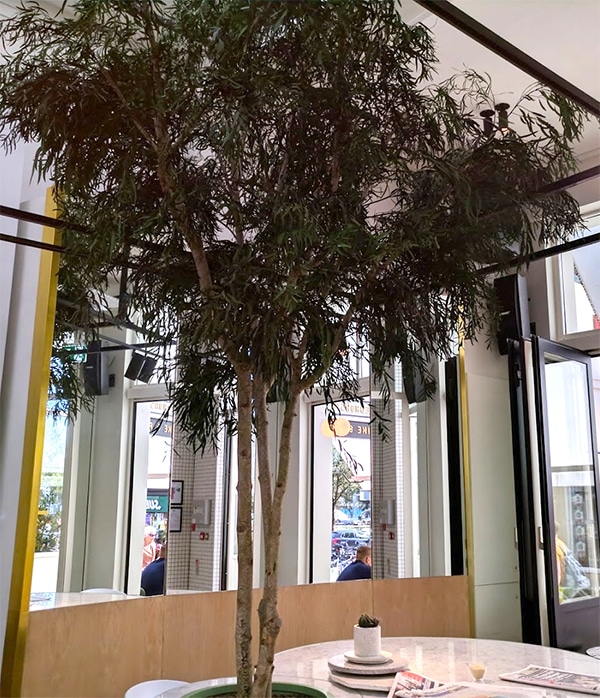 So we could both eat, LV went back in her pushchair and in between eating, Lyndsay was rocking the pushchair, meaning she was taking her time eating brunch. Which is fine because brunch isn’t meant to be rushed and we had a fantastic time chatting and catching up. However, once the staff saw I’d finished my food, they started hovering near us in turn which seemed a bit over the top. Finally one of them came over and asked outright if we were both finished, despite Lyndsay still having food on her plate and was obviously eating in between chatting and pushing LV.

After the plates were taken away, we were asked if we wanted anything else, so I said I’d like to see the puddings, at the same time as Lyndsay said she wasn’t sure she wanted anything else. However, I managed to persuade her to get pudding with me and the guy came over to take the order. Once I’d given mine, he promptly took the menu and left, without even bothering to check with Lyndsay if she wanted something or not. I ended up having to get him back so he could take the rest of our order 🙁

Anything else you need to know?

Redroaster is open daily from 7am until 5pm, with some bookable seats at certain times of the day. Apparently lunchtime can get incredibly busy! Once 5pm hits, Redroaster turns into a restaurant called Pike and Pine. Oh and they don’t allow dogs. 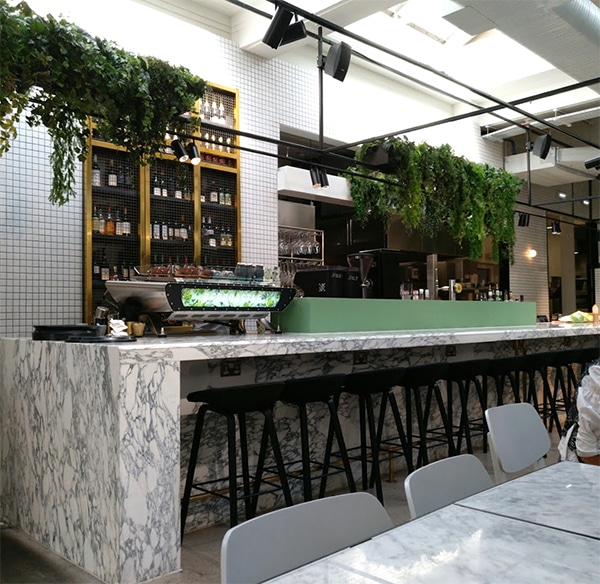 As lovely as it looks, and I’m glad I’ve finally tried it out, I’m not entirely sure I’d bother going back as the service seems to be a bit hit and miss.

Have you tried it out yet? Would you want to go just for the aesthetics? Let me know in the comments below 🙂 x