My Bad Habits | Part One 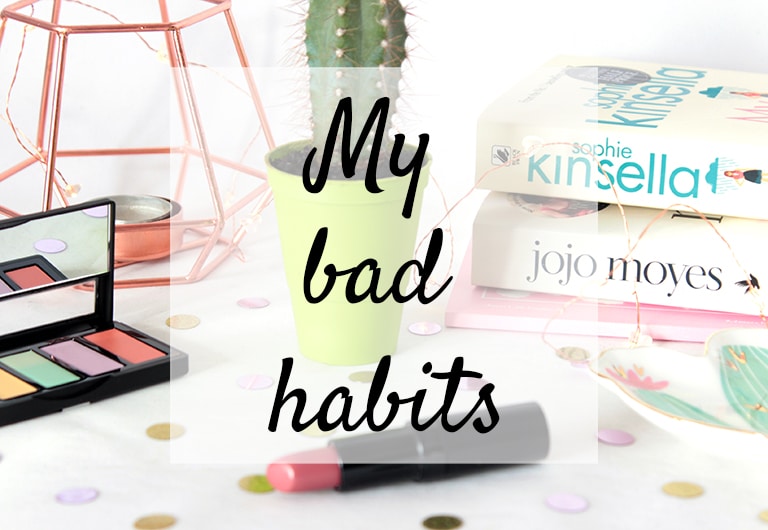 Being a blogger and maintaining an active presence on Twitter and Instagram, it’s really easy for me to put up photos, tweets and blog posts that show me being awesome and at my best, but sometimes I’m really not.  I do try to write more honest Insta captions to go with my pretty photos now, which I hope makes me slightly more relatable (I dunno though, do they?  Can someone let me know?)

I’m not perfect by any means though and I happen to have loads of bad habits just like everyone else, so I thought I’d let you in on a few!

1. Swearing – I do honestly try to curb this one when I’m in public, because I find there’s nothing worse than being on a bus or in a cafe or walking down the street and overhearing people casually swearing for no reason (“did you see Sandra’s jumper?  It was fucking hideous!).  This also applies when I’m at work, because I obviously need to be professional.  Sometimes though it’s so hard not to drop a swear here and there; especially when there are so many irritating people around.  That being said, get me in a WhatsApp message to my friends and I’m dropping ALL the swears!!

2. Being really impatient – Whether it’s being stuck behind a slow driver that I can’t get round, to counting down the days to a special event; like Christmas or my birthday, I can’t help being completely impatient because I want everything right now!!  I’ve always been impatient and I don’t really see it changing any time soon.  I try to do calming breathing but it never seems to work because, when I stop, I still don’t have what it is I want in front of me!!

3. Sniffing/coughing – This is probably the one that drives J up the wall most of all.  Not only do I have asthma, but I sometimes suffer with hay fever as well (and I think we can all agree that the pollen count has been ridiculous this year), so I’m either constantly coughing my lungs up or sniffing away and, as I’m also pretty lazy, I usually can’t be bothered to get up and get my inhaler or some tissue :/

4. Being an awful time-keeper – I’m either super organised and end up arriving somewhere at least half an hour early or I leave everything right until the last minute and end up being a bit late.  I can’t ever seem to just arrive on time; it’s very annoying!!

5. Burping – Anyone who’s ever met me at one can probably attest to the fact that I’ll happily just let burps out and I’m not too bothered about what volume they happens to come out at!!   I’m probably worst for doing it in public and in restaurants; oops!!  I bet they’re all secretly thankful it’s only a burp though, I mean, I could be dropping farts instead 😂😂

What are your worst bad habits?  Are any of yours worse than mine?  Let me know in the comments below 🙂 x