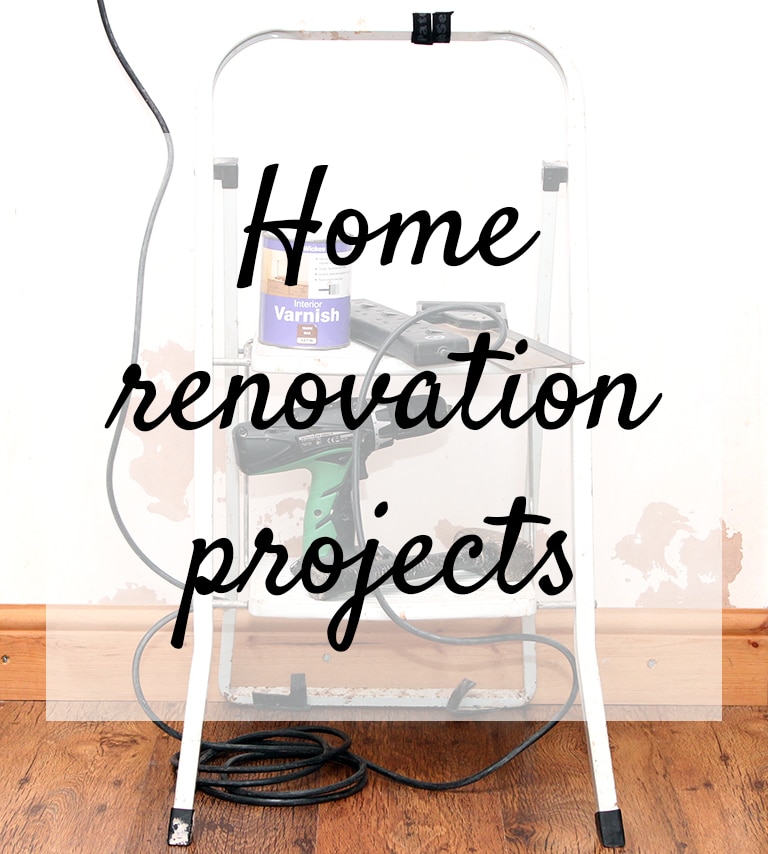 I moved in with J in April 2014 and, because I lived in a rented flat at the time, I was able to move my stuff out over the course of a few weeks. He bought the house back in 2009 and it needed a lot of work doing to it to make it habitable.

He worked tirelessly (with his dad) to rip out the bathroom and kitchen and had them refitted; he also hung new doors, put down underfloor heating and laminate flooring in the bedroom, lounge and hallway and put beautiful black tiles in the bathroom and kitchen. He also tiled the bathroom walls with faux white marble tiles!! He had new windows installed and had the old soffits and drainpipes ripped out because they contained asbestos :/

It meant that when I moved in, it was mostly just the aesthetics that needed doing. I mean, let’s be honest, most of the aesthetics still need doing because life got in the way!!

When moving day was finally over, it was awful. There were boxes everywhere, all over the kitchen and lounge. Despite having had weeks to prepare, to create space for my things, we hadn’t. 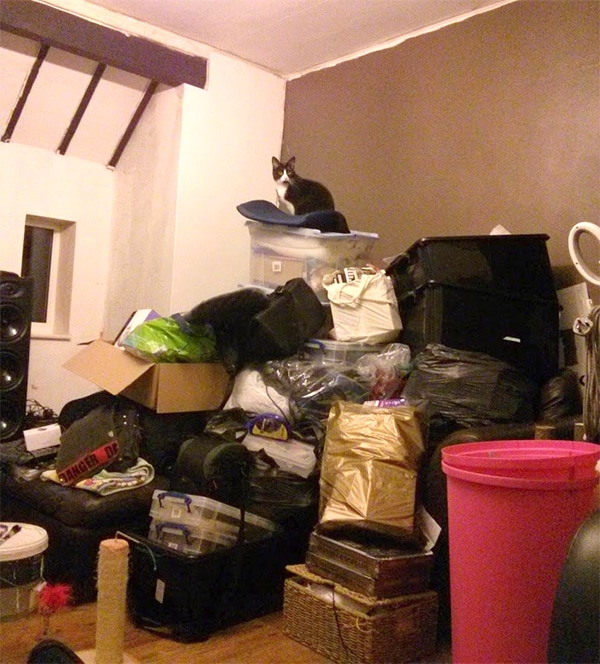 A few months after I’d moved in, my parents came to visit the house for the first time. As we hadn’t got (and still don’t yet) a spare room, they booked into a hotel. I was going to meet them in town first and then bring them back for tour of the house and dinner, which presented a slight problem. Since moving to Brighton, I’d not lived anywhere with a dining table that people could sit round and eat.

Food was usually eaten off plates balanced on knees while sitting on the sofa or sitting cross-legged on the floor. I mean it’s okay, but not what I wanted my parents to have to do! I told J I was worried, but he said there wasn’t much we could do at such short notice (cheers love!!) I went off to meet my parents in town for lunch and left J to his own devices at home. Unbeknown to me, J was putting a plan of action in place.

This is what our dining room had looked like before I went out, we’d already cleared some of the bits upstairs, but it was still messy and cluttered. 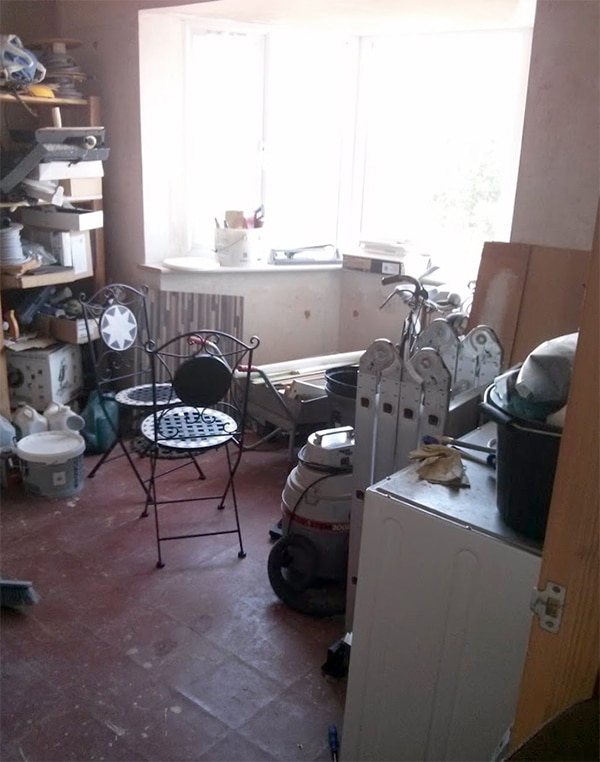 When I came home, he’d cleared a massive space, moved loads of bits upstairs and put down some hardboard on the floor. He’d also brought the dining table and chairs downstairs, built them and set them up so I could serve dinner at the table for us and my parents! What a sweetheart!! <3 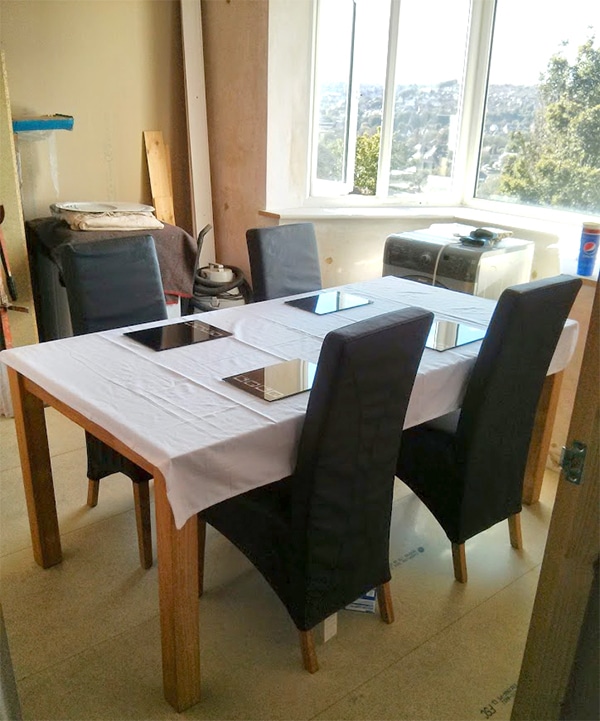 Over the next few weeks, we decided that we wanted to make the dining room properly usable.

The first step was to move everything out, we sorted through a lot of it and threw away the broken washing machine! The rest of it went upstairs (our temporary storage/junk room). Once it was all cleared out, it was time to lay the flooring!! The first step was to measure and cut the hardboard properly to lay as a base. This wasn’t too tricky, although J got to do all the sawing 🙁 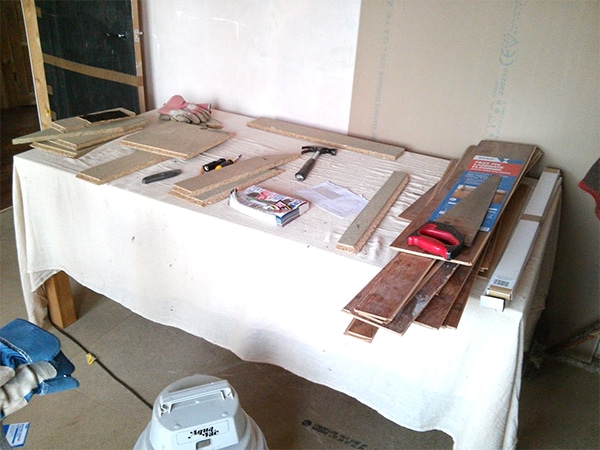 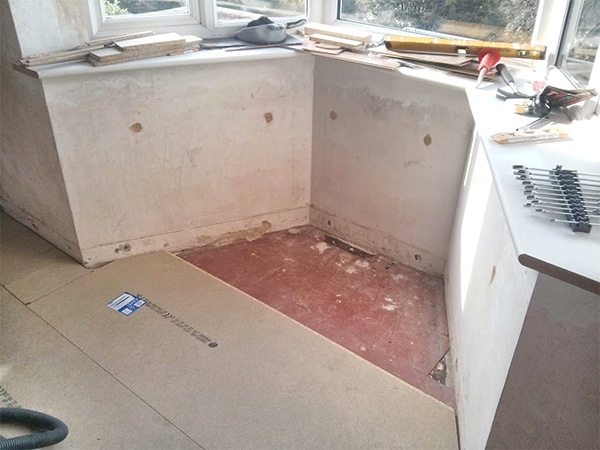 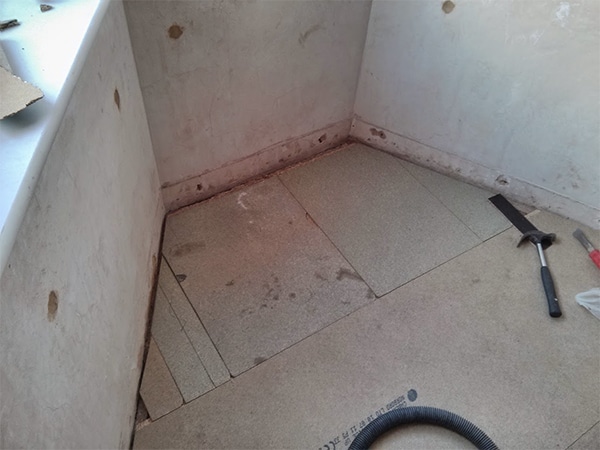 Once the hardboard was down, we put insulation on top to protect the underfloor heating mats. Putting the heating mats down took longest of all. It’s one massive long piece (which J had ordered a couple of years ago) and was made to fit the floor exactly. There was no room for error as it had to be cut to the correct size to create panels, and we had to make sure we didn’t accidentally cut through the wires and break the entire mat! It also had to be laid a certain way so the wires weren’t twisted at all when we laid the next piece of mat down. This proved problematic when it came to fitting it into the bay window. It took us a couple of days and in the end, it was J who worked out how we could do it 😀 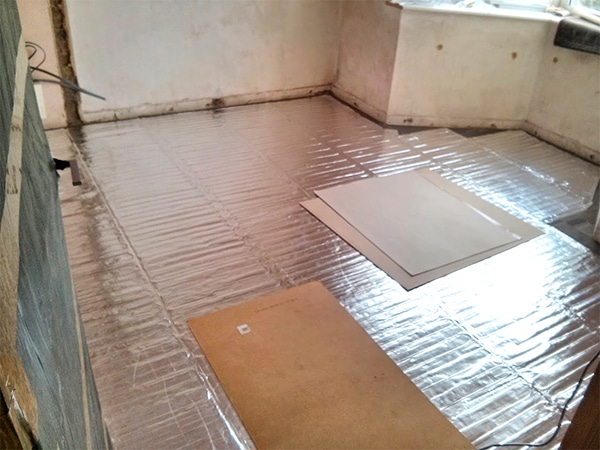 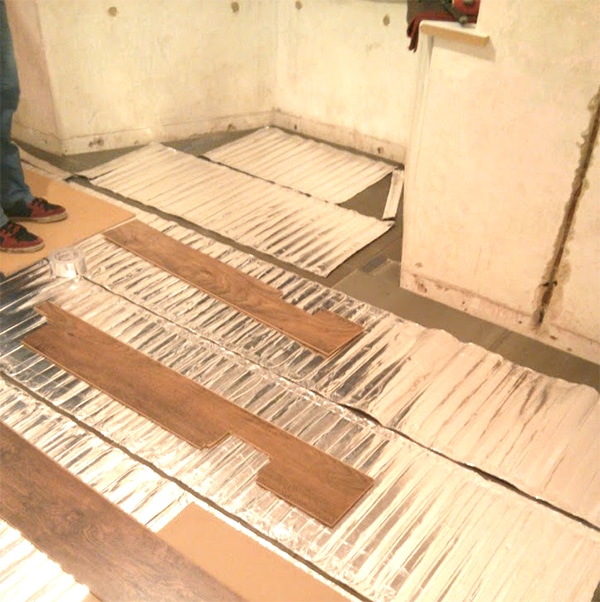 Once the heating mat was down, we had to test it to make sure it wasn’t broken before we started laying the laminate flooring; luckily, everything was fine!! We measured a lot (measure twice, cut once!) and J cut the pieces to the correct sizes. We had to be very careful as we couldn’t stand on the mats, so we had to use bits of flooring to walk across. 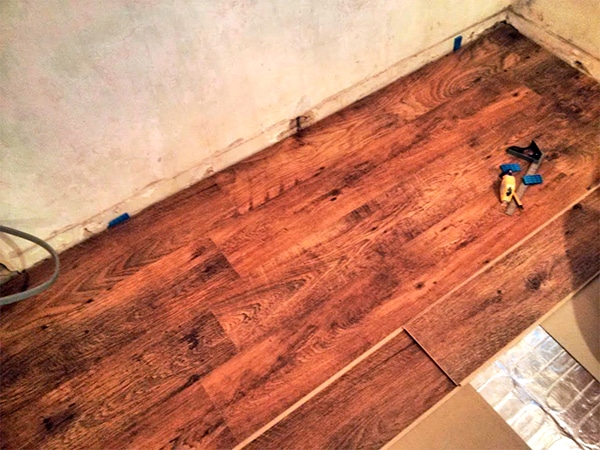 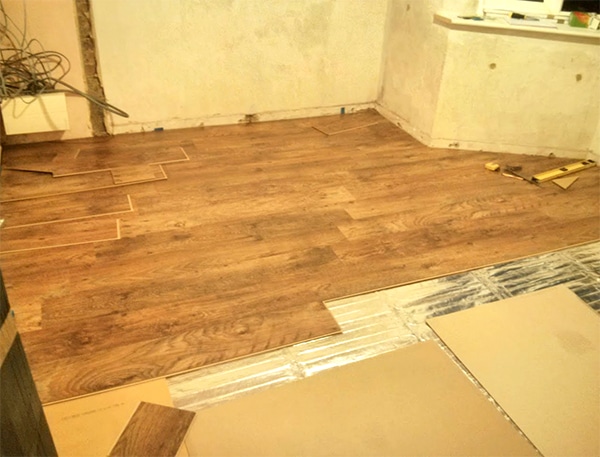 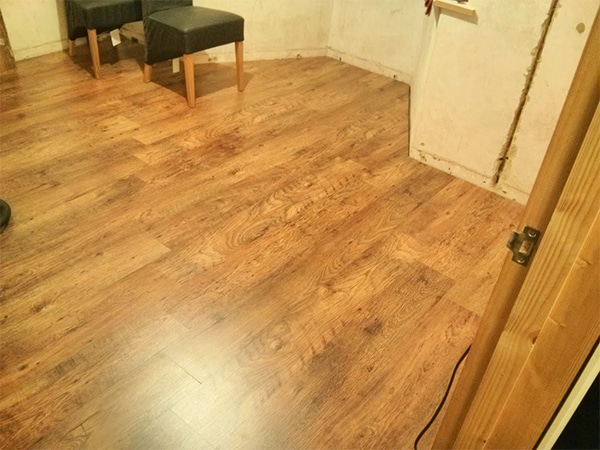 I love the floor and the fact that it’s the first room I helped with!! We now have the dining table and chairs in there, along with a cupboard for “stuff”, a cement mixer (because who doesn’t have a cement mixer in their dining room??) and J’s desk. Apologies for the ridiculously bright photo, the sun was pouring through the windows and we have no nets or curtains up yet! 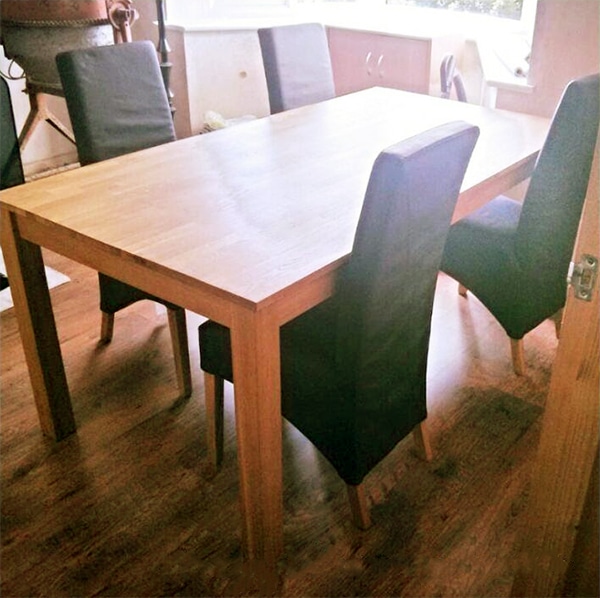 I think a grey or sage would look lovely in here, what do you think? Have you ever laid flooring, did you find it easy? Let me know in the comments below 🙂 x

Hello! We use cookies (not the edible kind) to enhance your browsing experience. Find out more.