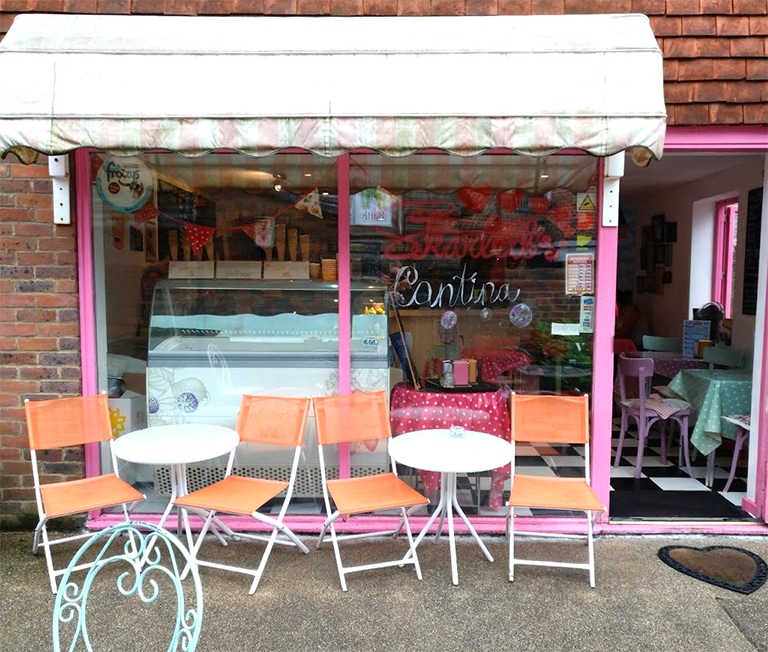 I’ve written about this before; every month or so me and my friend, Rachael, head out and do something super fun together!  After going to The Parlour in Arundel a few months ago with some friends, Skarlett’s Cafe in Battle popped up as a recommendation and, as Rachael and I both love food, it was the perfect idea!

Battle is about an hour’s drive away from Brighton and it has such a quaint old-town feel about it.  The cafe is in Old Ladies Court, just off the high street and there’s a car park about a 2 minute walk away which was pretty handy for us!!    There are no toilet facilities though, but there is one in the car park and it’s free to use!!  We paid for 1-2 hours parking and it only cost £2; I always forget that not everywhere charges an extortionate amount, Brighton parking is stupidly expensive!!

There is seating outside Skarlett’s but, as we picked one of the few days during the heatwave that it was raining on, we opted to sit inside instead!!

Inside there are 5 tables and it’s cute, colourful and very welcoming.  The decor is very much “a unicorn threw up everywhere” 🦄🦄🦄🦄  We sat in the corner on a bench covered in fruit cushions with a sparkly pink tablecloth on it! 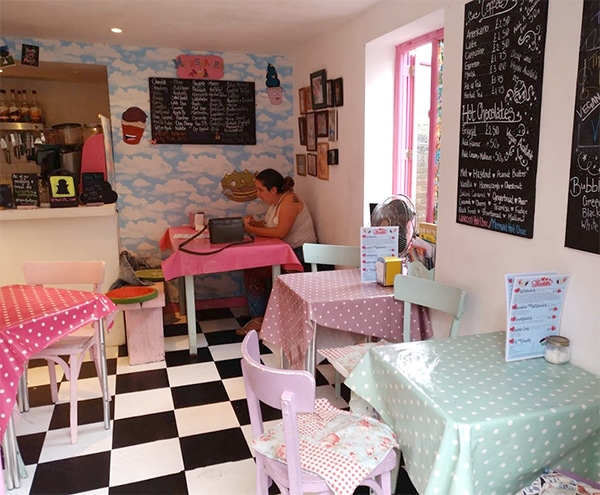 Not only do they sell the cutest cupcakes (including unicorn poop ones), milkshakes and freakshakes, they also have a great choice of sandwiches as well, although let’s be honest, we were only there for the freakshakes!! 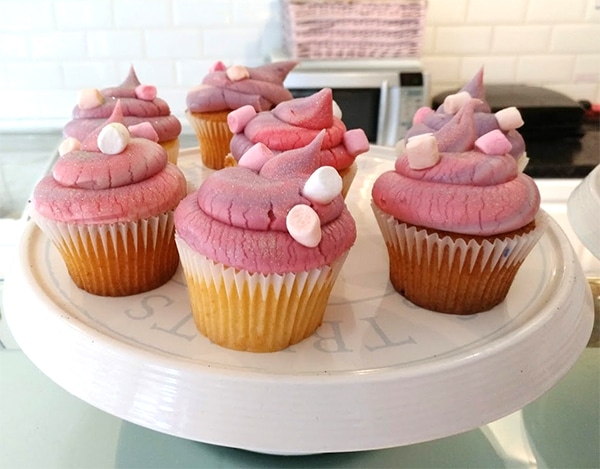 The freakshakes change every week (dependent on availability) and when we went, they were still having their Star Wars event so they had a choice of the Light Side (an apple candy shake with a donut and sweets on top) or the Dark Side (an Oreo shake with Oreos and chocolate brownie).  They also had a vegan Oreo shake option as well.

Rachael and I both went for the Dark Side freakshakes and they were absolutely delicious!!  There was plenty of cream and loads of little decorations sprinkled on top.  There was also a sugar paper Darth Vader and the Star Wars logo 😀 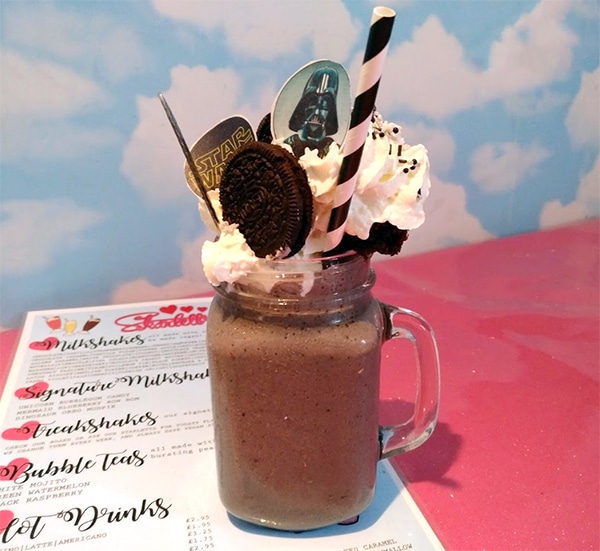 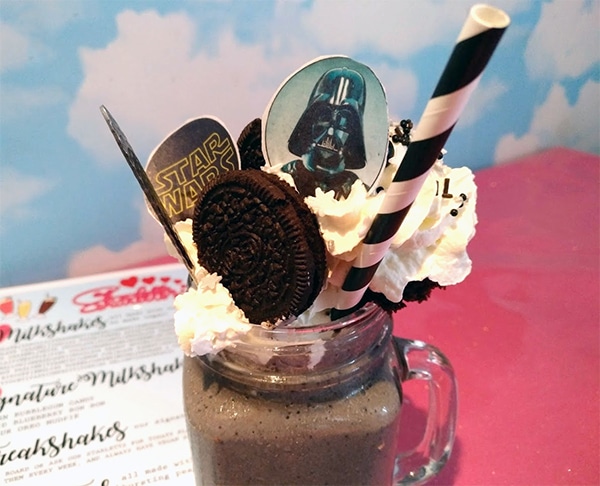 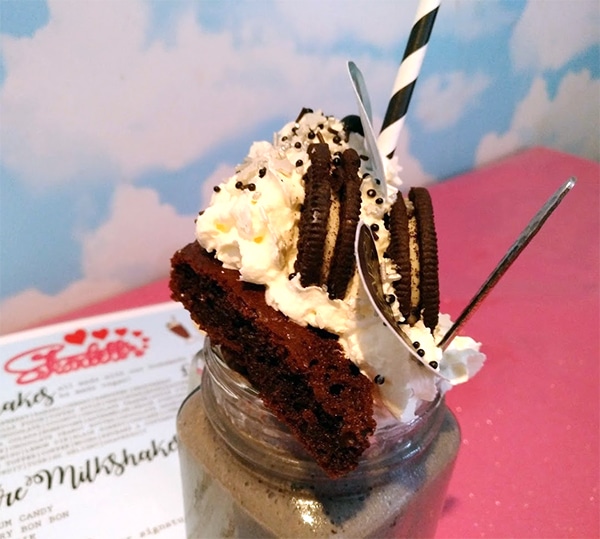 After I’d eaten mine, I found that I wasn’t too full but I didn’t feel like I needed anything else though.  We both took our partners a cupcake home though; J got an Oreo fudge one!!  I was tempted by their ice cream; check out this one!! 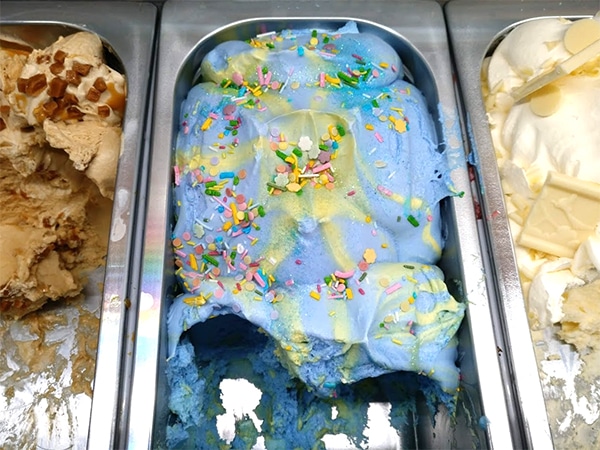 If you’ve never been, I’d definitely recommend a trip here.  The food is amazing and the staff are so lovely and friendly; plus we got two freakshakes for £12 and the cupcakes were only £1.95 each; you’d probably pay about £5 for one in Brighton!!  You can check out more of the incredible food on their Facebook page! 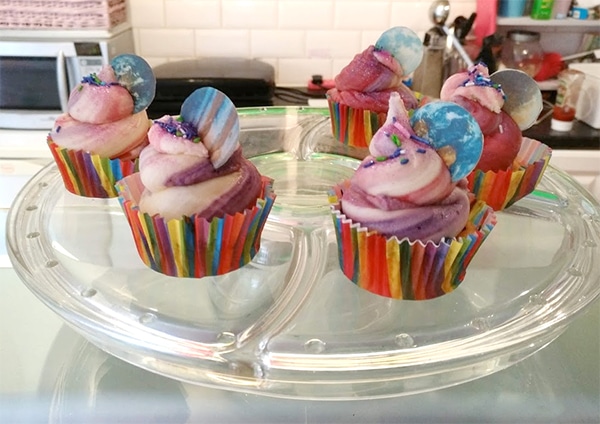