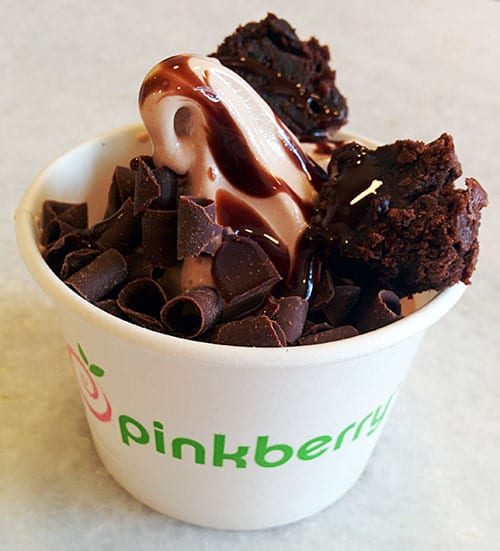 When I went to the US in 2011, Pinkberry* was everywhere. So it was disappointing that the UK didn’t have any. Until now. They now have a UK flagship store in Islington, London and I went up to check them out on their opening day.

*side story* Before I even got there, I had a bit of a catastrophe. I was all for wearing my jeans until I stepped outside two hours before heading to the train station to find that it was boiling hot outside. I own the total of two pairs of shorts; one are massive and look hideous and the other are a lil bit too tight (they’re a size 8 and it turns out I am not.) So I hot-footed to Next, tried on ALL the shorts and picked up a pair I really liked. And two tops. I really like them so an OOTD might appear soon. When it’s stopped raining. Thanks England, you da best! Anyway…

Pinkberry is only a 4 minute amble from the Angel tube station and not hard to spot. On the launch day, Sammie Jay was performing some songs (with her dad on bongos!) I assume they won’t be there every day doing that though 😛

The store was so clean and fresh and even had marble-esque tables for those perfect Insta shots.

The blue and white theme is prevalent throughout and the tiles on the wall are just gorgeous!

There was also an abundance of free champagne. (Admittedly, I didn’t actually drink any of it, I just stole one for the shot 😀 – nail wraps are from Dinkibelle if anyone was curious.)

I tried a little of all the flavours (except original); mango, pomegranate, chocolate hazelnut, strawberry and salted caramel (which I wasn’t personally a fan of). After the taste test, I opted for a mango one and proceeded to load up with healthy toppings.

I had strawberries with a little agave sauce on top of mine. Oh, erm, I don’t know how those mini Smarties got on there. The guy making my yoghurt must have put them there without me seeing! What a bastard!

I then decided to try out a pomegranate one, because it would have been rude not to. This time I stuck to strawberries and raspberries with more agave sauce. I think the pomegranate was my favourite one as it was so refreshing and the taste wasn’t too over-powering.

Lastly, yes lastly, (don’t judge me, I was there to review. No, that’s totally not the reason why I can’t fit into my size 8 shorts) I went for the chocolate hazelnut and loaded up on all the chocolate toppings. I had mini brownie bites, chocolate curls, chocolate drops and chocolate sauce. #noregrets

If you’re in London, I highly suggest taking a trip and trying Pinkberry out. They’re so delicious and you can add so many different toppings and sauces to make it unique 😀 A massive thank you to Pinkberry for the invite, you guys are awesome and I really hope you get some more UK stores soon *hint* Brighton.

Have you tried Pinkberry yet? Are you a frozen yoghurt fan? Let me know in the comments below 🙂 x

*I was invited by the venue to review but all views are my own.