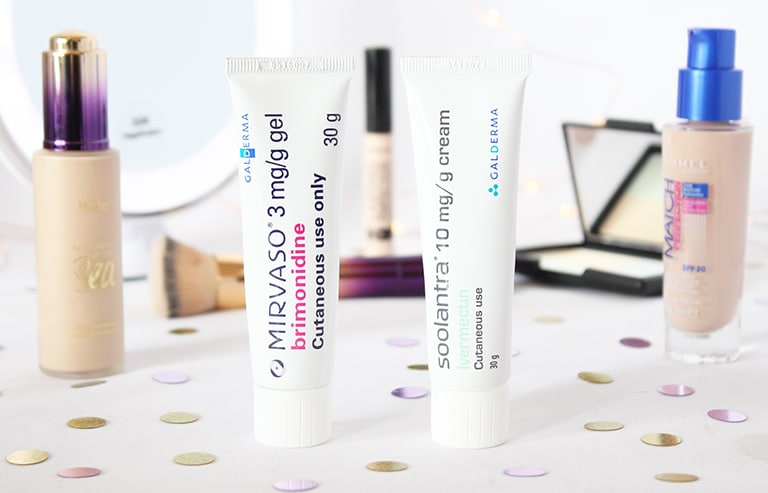 I’ve always known that I blush easily; even thinking about some really embarrassing situations that made me blush the first time round, have my face flushing and red and no, I’m not sharing what they are lol. I just thought it was one of those things to be honest. Until I went to the GP about it because not only was my face staying red pretty much all the time, but I’d also started developing acne exactly where the red patches on my face were.

People often mistake rosacea as just being able to blush really easily, acne or having sensitive skin. That pretty much exactly summed me up until my GP told me that I probably have rosacea which is a (non-contagious) facial rash.

The main symptoms include; a generally red or pink face most of or all the time and lots of small dilated blood vessels on the skin. This can also be accompanied by lots of small, red spots that often contain pus and even an uneven shaped nose at the tip.

There’s not a specific test for rosacea but my GP was able to tell straight away that I had it, rather than acne or a skin sensitivity.

What are the triggers?

There are so many triggers and I never know what my face is going to look like from hour to hour 🙁 I find that it really flares up if I’m stressed, embarrassed or feeling hot, when I have a shower and when I cook, because I’m often leaning over hot saucepans or opening the hot oven!

Other triggers can include changes in weather, alcohol and spicy foods.

On a bad flare-up day it makes me feel ridiculously self-conscious and it’s one of the reasons that I’ve stopped doing Insta stories for now. One, because it looks even worse on camera and two, because I don’t want to feel like I need to put foundation on to cover it just for a couple of 10 second chats!

I get rosacea on both my cheeks, in patches across my forehead, a little patch on my chin and across my jaw line and a patch on my nose under my eye. It’s quite embarrassing when people ask if I’m okay because I look like I’m having a hot flush, have really bad sunburn or that I look ill. I’ve not got to the point yet where I’m too ashamed to go out anywhere, but if I’m going out into town, out to dinner or an event, I will always put makeup on to hide it. I’d hate not to, only to find my face in the background of someone else’s photos :'(

I’m going to share my faces with you, because I feel like one day I want to stop being ashamed of my condition, and if it helps out even one person, it’s all worth it. So this is my face when there’s fab lighting and I’m wearing my beloved Tarte foundation. 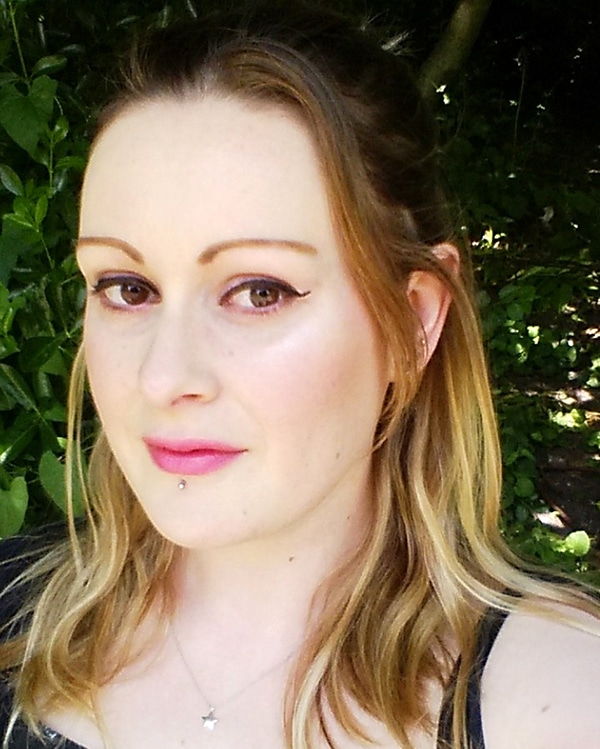 This is often a “usual” day for me with random little patches of redness on my cheeks, chin and forehead: 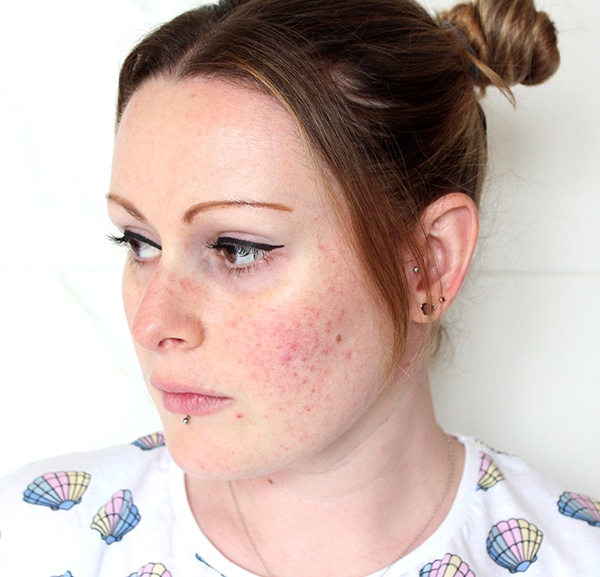 This is my completely unedited face after I got out of the shower a few days ago: 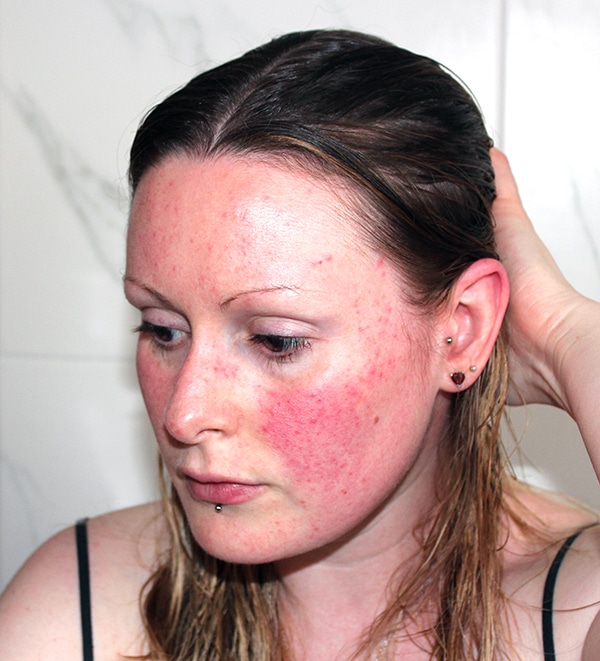 I find my face can also feel super itchy and incredibly hot and I have to be really careful to leave it alone as scratching it not only makes the redness worse but it can cause the spots to burst which could leave scars across my face. I also can’t cool my face down as nothing really seems to work. I almost have to let it burn itself out.

Are there any treatments or cures for rosacea?

I’m currently using two medications that my GP prescribed me. The first is Brimonidine tartrate gel which I apply directly to my face first thing in the morning. It’s designed to help restrict the blood vessels, which can lessen the appearance of the redness. The effects are meant to last for about 12 hours but I find they generally wear off after about 5 or 6. I can apply a little more if I want to, but I don’t generally tend to bother as I don’t want to start relying on using it all the time. 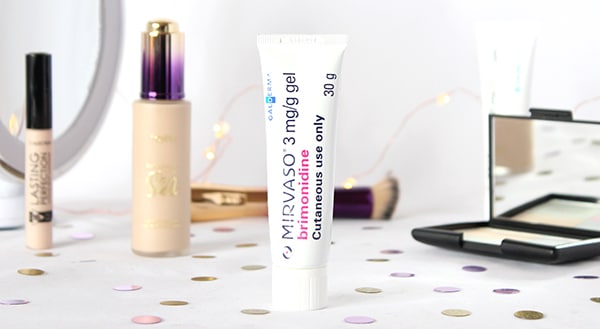 When I started using this product, I found that the side-effects were worse than the original condition. My face would absolutely flare up and it was constantly itchy. You’re only meant to apply the smallest pea-sized amounts to your face, but one day I accidentally put too much on and I looked deathly pale. It didn’t help that I hadn’t put any round my eyes (for obvious reasons) so they looked really purple against my white skin. I honestly wouldn’t have looked out-of-place in one of the Twilight films!

The second medication is a cream called Soolantra which has anti-inflammatory properties and helps with the spots and blemishes. I apply this one at night as it can also make my face feel super itchy.

I’ve definitely found that since using Soolantra, my spots have started to clear up slightly but I know there’s still a long way to go. 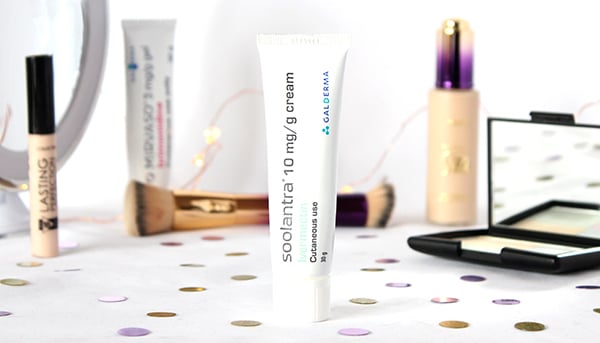 What advice would you give anyone who thinks their story sounds the same?

Go and see your GP as soon as possible because the sooner they can start treating it, it could be possible to significantly reduce the appearance of your rosacea. If it’s something you’ve had for years, it’s definitely still worth asking if they can prescribe something for you, as you never know, it could really help 🙂

If you don’t feel the medication you’ve been given is doing what it’s meant to, don’t be afraid to ask if you can try something else! It’s always worth giving it a good three months before you give up though!

Have you been affected by rosacea or are you now wondering if you might have it? Let me know in the comments below 🙂 x