I Won’t Put A Heart As My FB Status 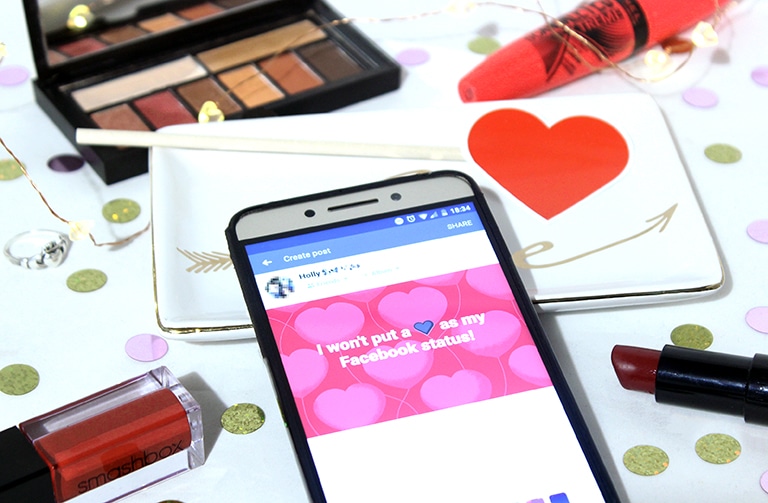 Okay, that title probably sounds a little bit weird, right? If you don’t have a clue what I’m talking about, hear me out.

Firstly, I just want to quickly get out the other Facebook bugbear of mine. The statuses that say things like “Having Asperger’s/depression/heart disease/COPD is really hard, put this as your status for one hour to show your support if you or someone you know has suffered one of these things. I know which of my friends will do it” I find these statuses a bit twee, especially because of the “guilt trip” to make you copy and paste it as your own status 🤨🤨 That being said, I kind of get the point, they’re meant to show your friends/family/random strangers that you added after a drunk night out that you care about their illness or disease, even if it doesn’t really explain what any of them are!

The one I absolutely can’t abide though, is the random ♥ on women’s statuses with nothing else written, because 9 times out of 10, it’s not to show they’re in love or they’re remembering a loved one who’s no longer with them, it’s because they’ve received a mass sent message which went something like “I dare you to put a heart as your status for at least an hour, without saying anything else, to raise awareness for breast cancer prevention week/breast cancer awareness week. Don’t forget to forward this on to all your female contacts.” I’ve had a few this year already and it’s only bloody January!!

There are so many things wrong with these messages;

I spoke to one of my friends about this who had breast cancer in her early 20s. Do you know how many hearts on people’s Facebook statuses saved her life? Precisely the amount of fuck all. The surgery and the chemotherapy helped save her life. The money that people donated into cancer research and support saved her life.

So I’m not at all sorry, if you put a heart on your status and don’t actually do anything to raise awareness for the charities doing great work or donate any money to them, even if it’s 50p or £1, I judge you. I judge you so hard. How exactly are you helping?

Do you think the FB hearts actually raise awareness or do you think they’re pretty pointless? Let me know in the comments below 🙂 x

P.S. I donated £5 to Breast Cancer Now and £5 to the Macmillan Cancer Support