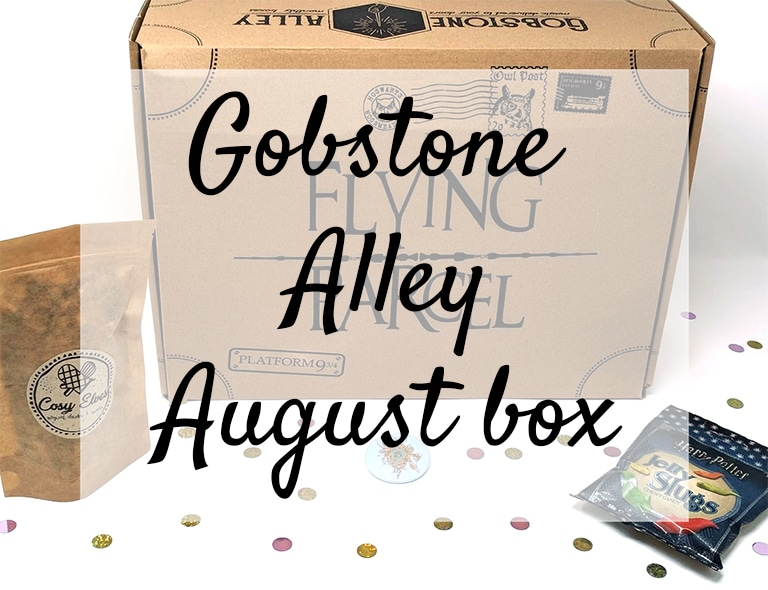 For my birthday (back in August), I decided I really wanted to order a Gobstone Alley box as a present to myself.  I got a one-off box for about £35 (the company is in Poland so I bought mine in euros).

If you’re unfamiliar with Gobstone Alley, they sell monthly Harry Potter related subscription boxes, filled with between 11 and 15 random and mysterious goodies (previous items have included a quill, wands, prints, stationery and you get the idea).  The boxes also always include one wearable item (usually a t-shirt), some collectible playing cards, a candle from Incendio Candles and some loose leaf tea made by a company called Cosy Elves.  The boxes are also filled with goodies from small independent retailers so you really feel like you’re getting something unique that’s been made just for that month’s box!

You can also choose what house you’re in and get you’ll get house specific items (Slytherin obviously 💚🐍💚🐍) and your house coloured tissue paper to hide everything!

I ordered the August box on 16th July and the website said the boxes would be shipped out between the 20th and 24th August.  On 31st August I received an email from UPS saying that my shipping label had been created and the estimated delivery was 5th September.

5th September came and went and the UPS tracking still said the label had been created.

By the end of September, and around the time that the September boxes were meant to be getting shipped out, I’d still not heard anything.

Finally on Tuesday 2nd October, my UPS tracking changed to “in transit” and I got my box on 5th October!!

Let’s address the second issue; communication or the lack thereof:

Once my box was about two weeks late, I checked the Gobstone Alley website, their Twitter and Instagram accounts to see if they’d said anything about the delay.  There was no statement at all about why the boxes were late; nothing, not a sausage.  I then searched on Twitter and found a few people complaining they’d not heard anything either 🙁

A couple of people posted screenshots of emails they’d received from Gobstone Alley about two weeks after that to say there had been a delay but the boxes would be shipped out that week.  They were not.

I sent three emails and got a reply to one of them apologising for the delay but that my box would be shipped out that day.  It wasn’t shipped out until the following day.

One of the YouTubers I follow then uploaded on her Insta stories a screenshot from the company saying they’d had issues within the company; they hadn’t expected the amount of interest in the boxes and couldn’t cope with the demand and a bad break-up stopped them being able to use any social media accounts.  I mean, that sucks, but to leave it to a YouTuber who isn’t even affiliated with the company to tell people (and only anyone who happened to see her Insta story) is pretty despicable to be honest.

So at least the box was worth it, right?:

The box itself is pretty cool and they’ve obviously taken the time and effort to make sure it looks like it could be from the Harry Potter universe, but once I’d opened it, it started going downhill… 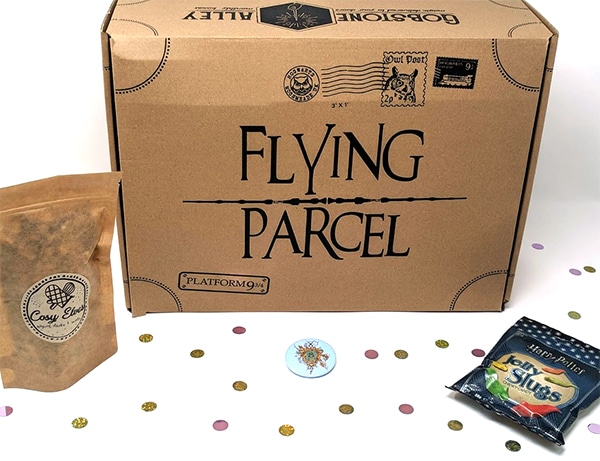 For the wearable item, I got an Arthur Weasley inspired rubber duck t-shirt.  While the duck is pretty cute, the quote doesn’t really make sense and it’s not a direct quote from the films or the books.  I don’t know if was due to copyright or a language issue. 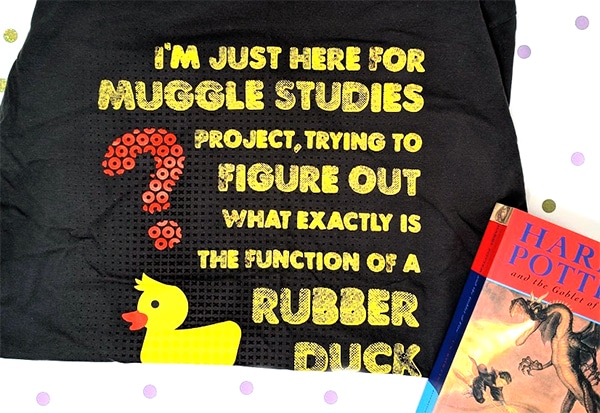 Underneath that was a tulle bag with a golden egg inside.  It has the words “take a bath and – er – take the egg with you” around the middle.  I had no idea what it was meant to be, although I guessed it was probably bath-related, so I had to check the item list.  It turned out was bath salts inspired by Fleur Delacour!  Unfortunately I can’t use my bath at the moment, so this was pretty useless 🙁 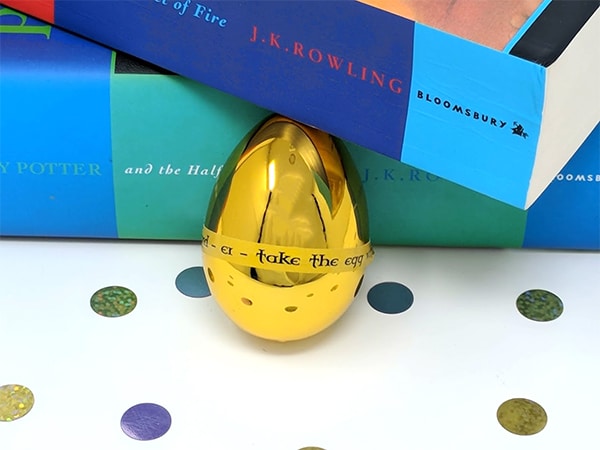 Next up was a Beaubatons Academy badge.  It seemed, up till this point, that this box was meant to be Goblet of Fire inspired. 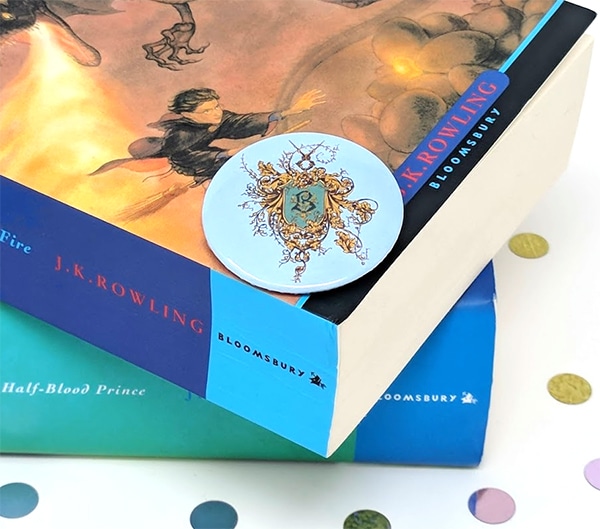 The remaining items were all hidden under cardboard squiggles so I got to go hunting for goodies!!

I found a Slytherin coaster (house specific), a 9 ¾ keyring and an Ollivander’s wand pencil box.  I’d hoped that maybe there was a wand pen inside, but it was empty.  I did like the fact it said holly and phoenix feather on the end though 🙂 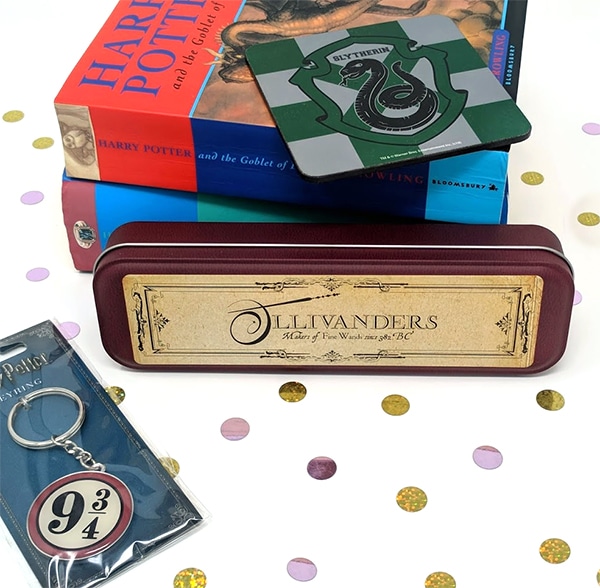 After that I found a tote bag with various Diagon Alley shop names ticked off, with Hogwarts remaining unticked.  It’s a really nicely made tote, but personally not something I’d use. 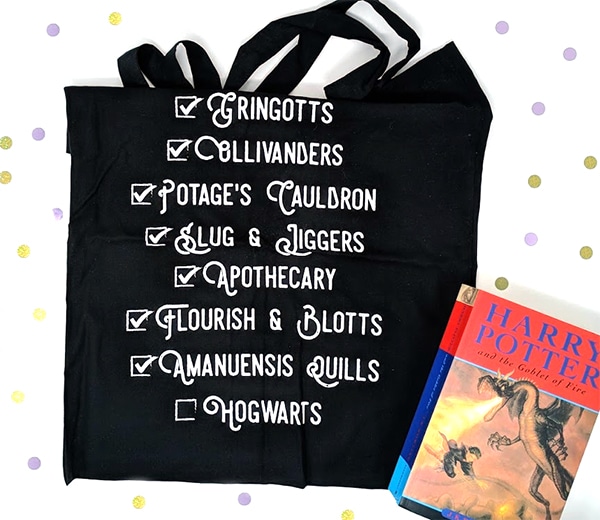 Next up was a quad of tins which are pretty cute and probably the only thing I actually liked from the box.  They are: Potion No. 86, 9 ¾ Hogwarts Express, the Quidditch World Cup and the Marauder’s Map! ♥ 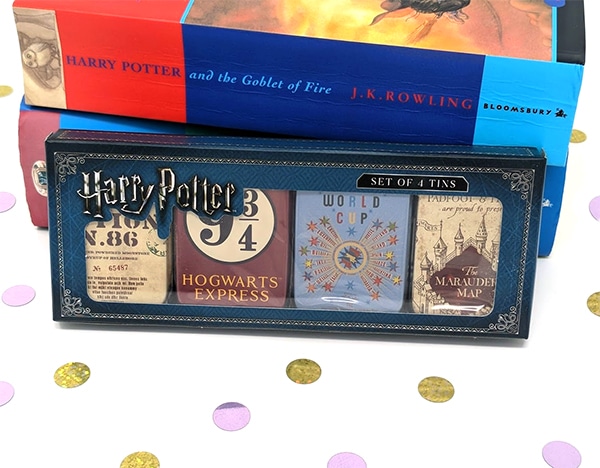 Two of the items that always feature in these boxes are candles and loose leaf tea.  August’s candle was inspired by Beaubatons Academy but to me, it just smelt like toilet bleach 🙁  The tea is Neville’s hand-picked flower tea and has oolong red tea, jasmine flower and elderflower in it. 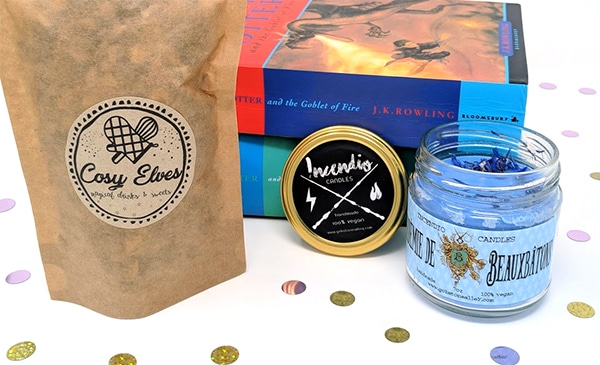 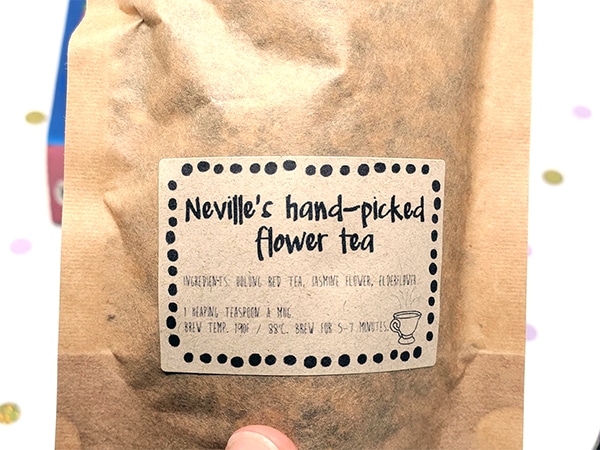 I also got a packet of jelly slugs and a Muggle Studies A5 metal wall plate.  I’m not really a fan of muggle studies if I’m being honest, my favourite subjects are Potions and DADA. 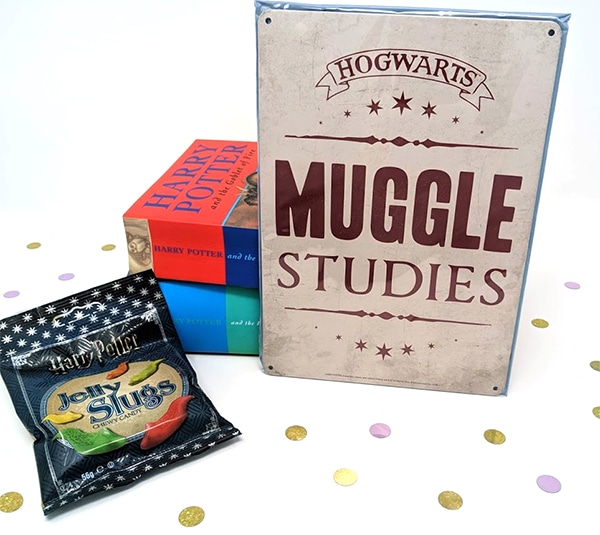 I then found the bit of paper with all the items on it and realised I’d not seen the Felix Felicis that was listed!!  After rooting around the box, I found it and I was super excited to open it as it’s my favourite potion (I even have a tattoo!!)  Unfortunately it wasn’t as magical as I was expecting.  It was a plain brown bottle with a label stuck on it and what looks like resin with glitter and bubbles inside 🙁  It didn’t really make up for the rest of the box 🙁 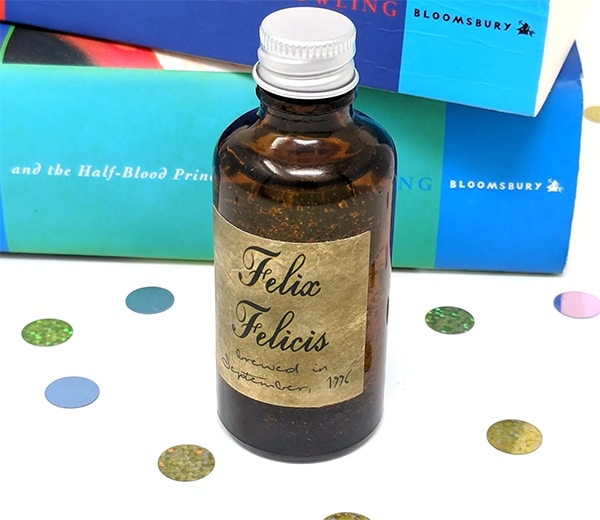 All in all, I was actually really disappointed and underwhelmed with my box.  It felt like all the items were small “filler” items, kind of like when you’re a child and you get little Christmas stocking gifts; however, there seemed to be no “main” present in this box.  Plus I couldn’t really tell the theme of the box as some of the items are from Goblet of Fire, but the Felix Felicis appears in Half-Blood Prince!!

Considering I’d been waiting since August for this box to arrive, you’d have thought they could have added in an apology or an extra item, but there was nothing 🙁 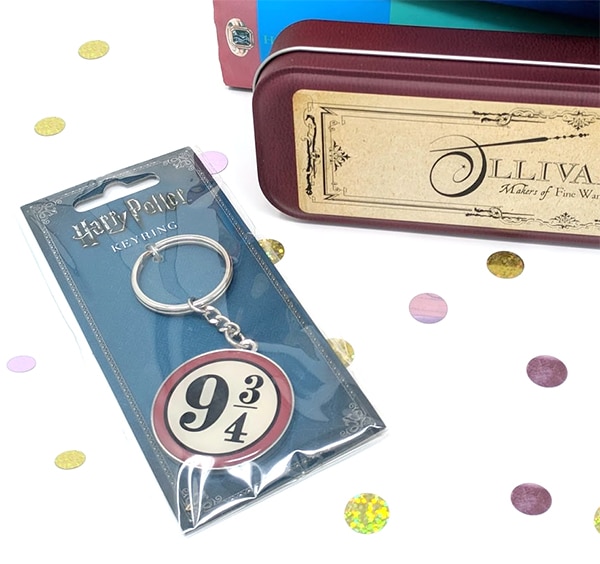 I’ll definitely never bother ordering one again and it’s completely put me off ever trying a different Harry Potter sub box 🙁  I’m actually in the process of sending my box back for a refund.  I loved the idea that Gobstone Alley had loads of unique items not available in shops, but most of the items were licensed that I could have bought myself elsewhere if I’d wanted to!! 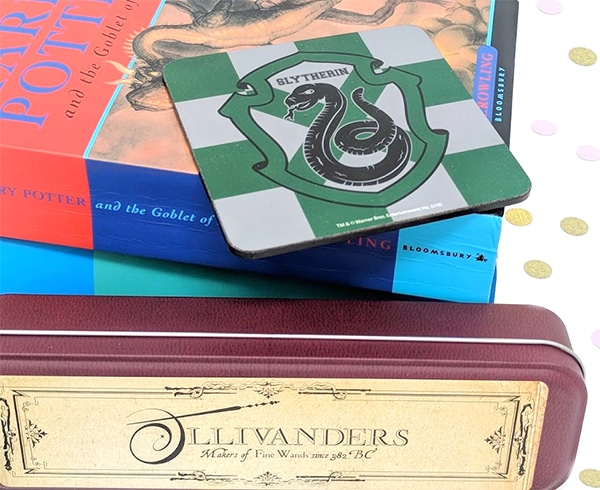 Have you ever ordered a subscription box?  What box did you get and did you love or hate it?  Let me know in the comments below 🙂 x